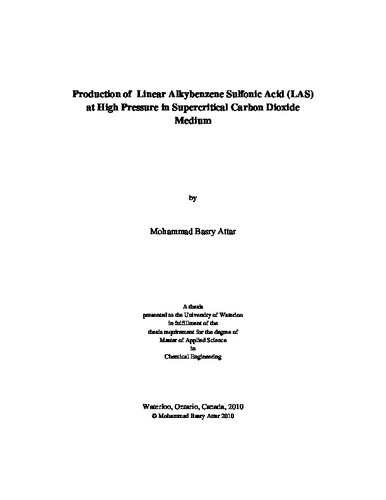 Linear Alkyl benzene Sulfonic Acid (LAS) is the main ingredient of many commercial formulations for industrial and domestic synthetic detergents. The current industrial LAS production method includes sulfonation of linear alkylbenzene (LAB) with sulfur trioxide in tubular falling film reactors. In such reactors a diluted gaseous stream of SO3 and dry air, feed gas, is contacted with liquid LAB while both reactants flow co-currently downward. The reaction is highly exothermic and product quality is primarily dependent on heat removal efficiency from the reactors, and also contact time. This research project investigates a new route for the production of LAS. This new method employs SO2 oxidation over activated carbon at 25oC to SO3, followed by the extraction of the adsorbed SO3 from the activated carbon by supercritical carbon dioxide (SCCO2). The condensed phase CO2-SO3 mixture after expansion is contacted with LAB where sulfonation of this substrate occurs to yield LAS. The new route should offer lower operating temperatures and lower feed gas SO3 concentrations in the sulfonation reaction to minimize loss of LAB to side-reactions and reduce LAS contamination (that appears as unacceptable product discoloration). The laboratory set up was designed, assembled and in total 25 experiments were carried out. Over the course of experiments a number of remedial actions were taken to improve set up functionality and reaction yield. The problems needed to be tackled included feed gas moisture removal, SO2/SO3 adsorption/desorption efficiency, homogeneous mixing of reactants and reducing the SCCO2/SO3 flow rate through LAB columns. The maximum LAB/LAS conversion obtained was 3.6 % per sulfonation column. The maximum SO3 removal efficiency from activated carbon obtained was 77%. It was also found that nitrogen gas in a specific temperature range may be used as the desorbing agent in lieu of supercritical carbon dioxide with satisfactory performance. As supplementary data, the Brauner-Emmet-Teller surface area of activated carbon type BPL 6x16 from “Calgon Carbon Corporation” was measured.