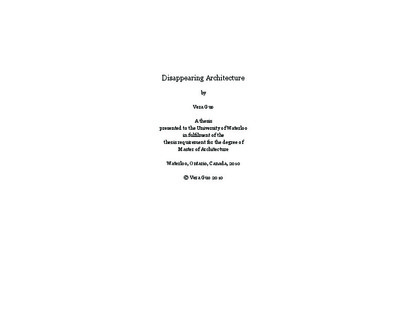 Disappearing Architecture Media facades dominate the skylines of many of our cities. A quick stroll through today’s urban areas involves a one-sided conversation directed at pedestrians. Advertisements aggressively compete for attention, creating a visually chaotic battlefield of logos, brand names, and flashing lights. Structures themselves recede into the background behind this visual confusion, withdrawing completely under giant billboards that are plastered with images and LED lights. In the visual order, architecture comes second, if at all, behind graphics and media messages. Building facades are now covered with flat images and advertisements which use savvy marketing schemes. The vast and overtly stimulating messages, however, have gradually desensitized viewers as they become increasingly accustomed to this visual noise. More explicit images, brighter lights, and larger movements are now required to make an impact. As media facades are such a large part of the competitive communications industry, these facades have come to influence architectural practices which are in danger of succumbing to the demands of the ad industry. It is thus important to create a balance between media and architecture, which is mutually beneficial to both. Architecture can be preserved while advertisements can also flourish. This thesis examines the use of digital media to enhance the public’s connection to the built form within public spaces. Chapter one explores the various spaces in which people gather and their relationships to the city. Specifically, this chapter looks at the progress and decline of public realms in North America. Case studies of Times Square in New York City, Shinjuku Station in Tokyo, and the Las Vegas Strip in Nevada illustrate how each city negotiates media saturation. Chapter two presents eight design principles for the successful integration of digital media in public spaces. These principles were established through the use of historical references, case studies, and precedents showcasing each principle’s potential. Chapter three looks at Galt City Centre in Cambridge, Ontario where the principles outlined in chapter two are demonstrated through a video application that was part of a public Christmas event in Cambridge. The project in Galt addresses the existing features of the city which engage its public spaces, encouraging a symbiotic relationship between the architecture and video facade. The integration of digital media and architecture can be enriched in the choice of strategic locations highlighting local character. Installations can be cultural, create local identity, become reactive for community engagement, and encourage the public to inhabit the city by transforming existing spaces into communal areas. Installations connect with users in their use of the characters inherent to outdoor spaces; texture, sounds, emotions, and the experiences of different seasons and times of day. With a more responsive approach to content design and implementation, the outcomes of the use of digital media on facades can be positive.