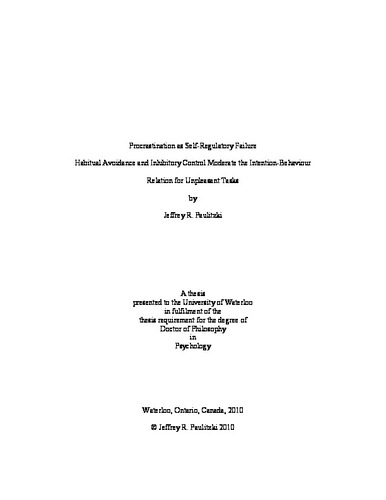 Recent conceptualizations of procrastination suggest that procrastination is akin to self-regulatory failure wherein the effect of good intentions is attenuated for individuals who tend to procrastinate. Some researchers speculate that this effect is due to subtle neurological deficits that make it more difficult for procrastinators to follow through with completing tasks. The present work examines this claim while also investigating two factors that should theoretically weaken the effect of intentions for engaging unpleasant, but important, tasks – namely habitual avoidance and the executive function of inhibition. Study 1 investigated the question of whether chronic avoidance patterns may become so entrenched that they take on the qualities of a habit. This is important because habits are known to be less reliant on intentions because they are triggered in a relatively automatic fashion. Habit indices were created which assessed the degree to which the experience of avoiding particular tasks was automatic and self-descriptive in nature (Verplanken & Orbell, 2003). The results confirmed the expectation that more frequent avoidance patterns are experienced as occurring relatively automatically. Habit-like avoidance can be measured reliably and is related to other constructs in expected ways. For example, habit-level predicts reduced task quality and lower rates of task completion above-and-beyond motivational variables (e.g. intentions). Finally, habit-like avoidance patterns were more often associated with stable features identified by participants as being present in the environment. Using a prospective design, Study 2 assessed the degree to which existing habitual-avoidance patterns weakened the effect of good intentions to carry out unpleasant tasks over the course of a week. Several computer tasks at Time 1 were also used to assess inhibitory control or the degree to which participants could inhibit prepotent responses. In addition to personality traits which purportedly moderate the intention-behaviour relation (e.g. trait procrastination), the moderating effects of habitual avoidance and inhibitory control were also tested. Trait-level procrastination did not weaken the effect of one’s intentions to carry out unpleasant tasks. However, habitual avoidance and inhibitory control jointly moderated the effect of intentions on behaviour such that poor inhibitors had difficulty overcoming previous avoidance habits in order to complete unpleasant tasks during the week. In contrast, good inhibitors were able to behave according to their intentions irrespective of habit-like avoidance patterns. These findings point to the importance of recognizing the joint influence of avoidance patterns and regulatory capacities involved in self-control when understanding procrastination behaviour.