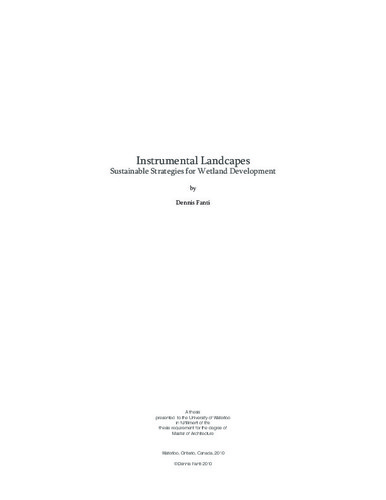 As a result of widespread urban development over the past two decades, global wetlands are disappearing at an alarming rate. This thesis develops a series of strategies for protecting wetland ecosystems from the ecological consequences that cascade through an ecosystem as a result of such development. This thesis is based on the paired assumptions that ecosystems represent networks of linked processes that operate across both local and global scales, and that the ecological integrity of any ecosystem can be maintained (a) only if the physical integrity of an ecosystem’s constituent processes is maintained, and (b) only if damage occurring at one ecological scale is prevented from affecting processes occurring at another. Thus, the strategies proposed here are multi-scalar and implemented at both the scale of the site and at the broader watershed scale. The strategies developed in this thesis focus on maintaining the physical integrity of the local wetlands as a means of protecting the processes that occur within the broader wetland ecosystem. The thesis proposes that wetland sites might be best protected from the effects of urban development by implementing a series of landscape interventions that provide the ecosystem with the means to reorient itself in new ecological relationships. Instead of attempting to recreate and control a complex set of conditions by imposing a deterministic architectural solution on the site, this strategy seeds new processes and new structural relationships such that the ecosystem reorganizes itself according to its own structural logic and grows into new stable relationships according to conditions that arise out of those processes. Because this approach generates a series of self-sustaining processes, human intervention is minimized beyond the initial stages. The stategies proposed here will be explored in the context of proposals recently announced by oil companies to develop ecologically sensitive wetland sites located on the Athabasca River in north-eastern Alberta.