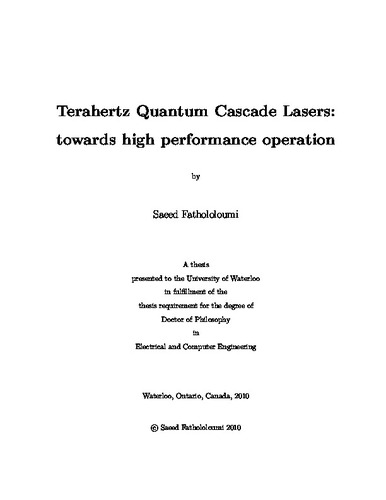 Terahertz (THz) frequency range (wavelength of 300-30 μm, frequency of 1-10 THz and photon energy of ~4-40meV), the gap between infrared and microwave electromagnetic waves, have remained relatively unexplored for a long time, due to lack of a high power, coherent, and compact source, as well as the lack of an appropriate detector and the transmission devices. THz wave has recently received considerable attention for potential applications in non-invasive medical imaging, detecting trace of gases in the environment, sensing of organic and biological molecules, security controls, local oscillators for heterodyne receiver systems, free space communication, etc. THz quantum cascade laser (QCL), as the relatively high power and coherent THz radiation source, was demonstrated in 2002. After near a decade of intense research, THz QCLs operate only up to 186K in pulse mode with maximum power of 250 mW at 10 K. This thesis discusses many aspects of theoretical and experimental design considerations for THz QCLs. The objective is to obtain a laser device that emits high powers and works towards the temperatures achievable by thermoelectric coolers. This work includes designing the active gain medium, and the engineering of the waveguide and heat removal structures. A density matrix based model is developed to explain the charge transport and gain mechanism in the intersubband devices, particularly for three well resonant phonon based THz QCLs. The model allows for designing of the optimum and novel active gain mediums that work at higher temperatures. The designed active gain mediums are fabricated using discussed low loss waveguide and efficient heat removal structures. The maximum operating temperatures as high as ~176 K is achieved. Finally a promising lasing scheme based on phonon-photon-phonon emissions is proposed that improves the population inversion and offers high gain peak.