Development of a Shear Connection for a Portable Composite Bridge 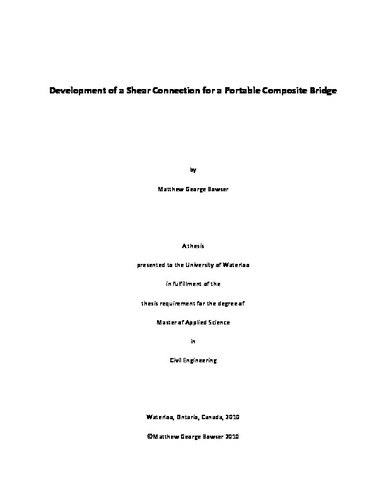 Bridges consisting of steel plate girders and composite concrete deck slabs are common throughout North America. For a typical highway application, these composite bridges are constructed with a cast-in-place concrete deck; however, some composite bridge designs utilize precast concrete deck panels. For example, bridges built on temporary access roads which service resource industries throughout Western Canada often employ composite bridges that consist of steel plate girders and precast concrete deck panels. For spans between 18- to 36 metres, permanent bridges currently present the best economy; although, portable structures would be preferred on these temporary roads so that the bridge could be relocated after the road is decommissioned. This study proposes a shear connection between steel plate girders and precast concrete deck panels, which allows fastening, and unfastening, of these two components enabling a portable composite bridge. In total, ten connection concepts were developed during this study and a multi-criteria assessment was performed to evaluate each concept respectively. Based on the outcome of this multi-criteria assessment, and subsequent sensitivity analysis, a preferred connection was established and a finite element model was developed for the analysis of composite bridge girders. For the initial development of the finite element model, the test set up and experimental findings of a test program by other researchers was employed so that the finite element analysis results could be compared to those reported from a physical experiment. Following this initial finite element analysis, full scale composite bridge girders were modelled so that the influence of the proposed shear connection on the behaviour of a composite girder could be studied. The model was verified for its ability to capture the possible effects of flange buckling, web buckling, and lateral torsional buckling of the steel plate girder. It was then confirmed that these local responses do not influence the performance of the proposed portable composite bridge system. A parametric study was also performed in which the effect of shear connection stiffness and spacing on the behaviour of the composite girder was investigated. This parametric study allowed the sensitivity of the proposed connection to variations in these two parameters to be assessed and also allowed preliminary study of the performance of composite girders with alternative shear connection designs.