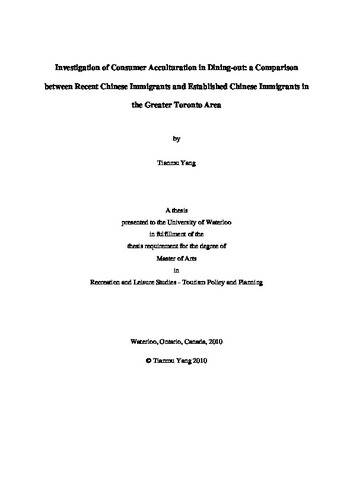 The interaction between culture and consumption of immigrants is an important research area in a number of fields including consumer behaviour, marketing, and ethnic studies. This article offers a specific look at issues related to the impact of acculturation on dining-out behaviour of Chinese immigrants living in the Greater Toronto Area in Canada, and the influence of individual factor of acculturation process (i.e., ethnic identification, length of residence, and age at immigration). This study focused on the similarities and comparisons between recent Chinese immigrants who have been in Canada for ten years or less and established Chinese immigrants who have been in Canada for more than ten years, in terms of their dining-out behaviour in the Greater Toronto Area. There were two samples, the recent Chinese immigrants and the established Chinese immigrants in this study. Snowball sampling was applied to recruit the total 30 participants (15 of each sample). The author started to recruit from two participants of each sample among her friends and relatives and asked the interviewers to recommend another two qualified participants. Semi-structures, in-depth interviews were employed in this study to explore the impact of culture, levels of acculturation, ethnic identity, situational factors of ethnic identification and dining-out behaviour. The interviews were audio-recorded by permission and conducted in the participant’s preferable language (in English or in Mandarin Chinese). Data analysis was guided by several previous conclusions and model in the literatures and conducted in both qualitative (coding) and quantitative (SPSS) methods. The findings resulted in some major conclusions. In terms of similarities, it is found that recent Chinese immigrants and established Chinese immigrants obtained restaurants information mostly from friends and relatives. They also searched on internet for other’s reviews, menus, and printable coupons. Secondly, result showed that Chinese immigrants perceived that because they have a long history of food, Chinese people are more willing to try different types of food when immigrated to Canada. Thirdly, situational factors such as peer influences played more significant role on dining-out decision making and self ethnic identifications than parental influences. In terms of differences, data indicated that among Chinese immigrants living in the Greater Toronto Area, recent Chinese immigrants had stronger ethnic identity to their original culture, and dined out more frequently than the established Chinese immigrants. Future, the result suggested that the highest level of Chinese ethnic food purchasing behaviour were reported by highest ethnic identifiers (ones who identified themselves as more Chinese). However, there was another important factor that influenced the levels of acculturation in dining-out behaviour more greatly than the length of immigration: the age at immigration. The study found that Chinese immigrants who immigrated at early age had the highest level of acculturation and identified themselves as more Canadian, while ones who immigrated at late life had the lowest level of acculturation and identifies themselves as more Chinese. The findings reflected the impact of culture and consumer acculturation in dining-out among Chinese immigrants in the Greater Toronto Area and could potentially contribute to the marketing implications to both ethnic and mainstream restaurant marketers. This study also gives some future thoughts on the exploration of more variables at individual differences, as well as other perspectives of research conducting such as from psychological or economic perspective.