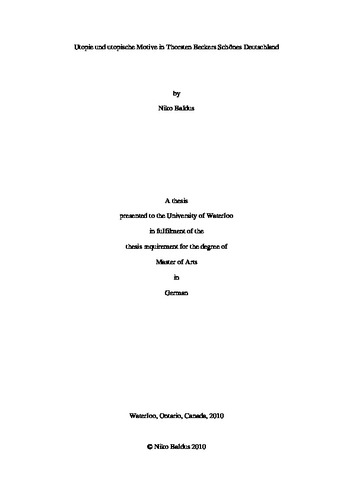 Thorsten Becker’s novel Schönes Deutschland appeared in 1996, six years after German reunification. Numerous people in both eastern and western Germany had hopes for a golden future in which the two Germanies would become one, but the realities of the “Wende” disappointed many citizens. Today enormous differences between eastern and western living standards, commerce and industry, and political and social mentalities still exist. Thorsten Becker’s novel imagines what would have happened had a new socialist revolution taken place reversing the “Wende” and returning Germany to a two-state configuration. This fictional new utopian socialist state, built upon market-orientated structures and isolating the populace from the outside world by means of full control of the media, addresses the disappointments associated with the “Wende” by letting the people think that they live in a paradise on earth where consumer-orientated happiness is more important than freedom, and individual happiness runs counter to the doctrine of the utopian state. The novel’s West German state, though not described in full detail, is similarly totalitarian in its control of public memory and history. With Schönes Deutschland Thorsten Becker partially revives the utopian genre in German literature, a category which had become largely ignored after the collapse first of national socialism and more recently of eastern European socialism. This can be traced to the fact that utopian fiction always contains totalitarian aspects, and the Germans’ experience with totalitarianism thus made them wary of the genre. By relying on motifs found in many utopian novels Schönes Deutschland explores the potential and the problems of imagining utopias in a media-based society. Therefore the main aspect of the thesis is not utopian motifs in a “Wende-Roman” but moreover the power and magic of the utopian imagination in modern times. This thesis reviews the history of German utopian literature before turning to a discussion of the new German Democratic Republic described by the novel’s nameless protagonist. The ability of this state to impinge on the freedom of the main character, and the roles which media, theatre and romantic love play in realizing or countering the state’s utopia visions for society are analyzed. The thesis concludes that utopian literature and thinking is not necessarily out of fashion. The novel contains both the positive and the negative sides of utopian thinking: progress, faith in the future, and personal individual happiness on the one hand, and totalitarian control, lack of political maturity, and a state-constructed propaganda of happiness on the other. Becker’s Schönes Deutschland is therefore worth examining because it combines these competing ideas in a way that provides new impulses for German utopian literature.