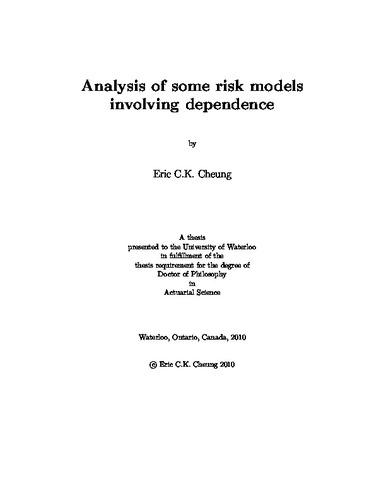 The seminal paper by Gerber and Shiu (1998) gave a huge boost to the study of risk theory by not only unifying but also generalizing the treatment and the analysis of various risk-related quantities in one single mathematical function - the Gerber-Shiu expected discounted penalty function, or Gerber-Shiu function in short. The Gerber-Shiu function is known to possess many nice properties, at least in the case of the classical compound Poisson risk model. For example, upon the introduction of a dividend barrier strategy, it was shown by Lin et al. (2003) and Gerber et al. (2006) that the Gerber-Shiu function with a barrier can be expressed in terms of the Gerber-Shiu function without a barrier and the expected value of discounted dividend payments. This result is the so-called dividends-penalty identity, and it holds true when the surplus process belongs to a class of Markov processes which are skip-free upwards. However, one stringent assumption of the model considered by the above authors is that all the interclaim times and the claim sizes are independent, which is in general not true in reality. In this thesis, we propose to analyze the Gerber-Shiu functions under various dependent structures. The main focus of the thesis is the risk model where claims follow a Markovian arrival process (MAP) (see, e.g., Latouche and Ramaswami (1999) and Neuts (1979, 1989)) in which the interclaim times and the claim sizes form a chain of dependent variables. The first part of the thesis puts emphasis on certain dividend strategies. In Chapter 2, it is shown that a matrix form of the dividends-penalty identity holds true in a MAP risk model perturbed by diffusion with the use of integro-differential equations and their solutions. Chapter 3 considers the dual MAP risk model which is a reflection of the ordinary MAP model. A threshold dividend strategy is applied to the model and various risk-related quantities are studied. Our methodology is based on an existing connection between the MAP risk model and a fluid queue (see, e.g., Asmussen et al. (2002), Badescu et al. (2005), Ramaswami (2006) and references therein). The use of fluid flow techniques to analyze risk processes opens the door for further research as to what types of risk model with dependency structure can be studied via probabilistic arguments. In Chapter 4, we propose to analyze the Gerber-Shiu function and some discounted joint densities in a risk model where each pair of the interclaim time and the resulting claim size is assumed to follow a bivariate phase-type distribution, with the pairs assumed to be independent and identically distributed (i.i.d.). To this end, a novel fluid flow process is constructed to ease the analysis. In the classical Gerber-Shiu function introduced by Gerber and Shiu (1998), the random variables incorporated into the analysis include the time of ruin, the surplus prior to ruin and the deficit at ruin. The later part of this thesis focuses on generalizing the classical Gerber-Shiu function by incorporating more random variables into the so-called penalty function. These include the surplus level immediately after the second last claim before ruin, the minimum surplus level before ruin and the maximum surplus level before ruin. In Chapter 5, the focus will be on the study of the generalized Gerber-Shiu function involving the first two new random variables in the context of a semi-Markovian risk model (see, e.g., Albrecher and Boxma (2005) and Janssen and Reinhard (1985)). It is shown that the generalized Gerber-Shiu function satisfies a matrix defective renewal equation, and some discounted joint densities involving the new variables are derived. Chapter 6 revisits the MAP risk model in which the generalized Gerber-Shiu function involving the maximum surplus before ruin is examined. In this case, the Gerber-Shiu function no longer satisfies a defective renewal equation. Instead, the generalized Gerber-Shiu function can be expressed in terms of the classical Gerber-Shiu function and the Laplace transform of a first passage time that are both readily obtainable. In a MAP risk model, the interclaim time distribution must be phase-type distributed. This leads us to propose a generalization of the MAP risk model by allowing for the interclaim time to have an arbitrary distribution. This is the subject matter of Chapter 7. Chapter 8 is concerned with the generalized Sparre Andersen risk model with surplus-dependent premium rate, and some ordering properties of certain ruin-related quantities are studied. Chapter 9 ends the thesis by some concluding remarks and directions for future research.