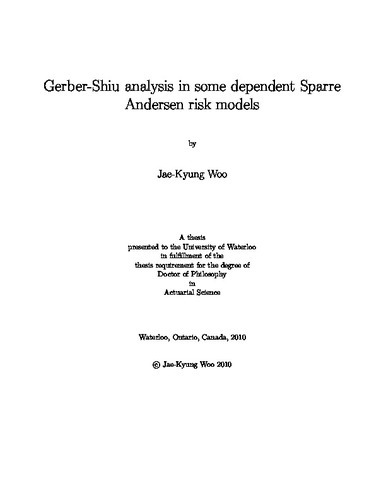 In this thesis, we consider a generalization of the classical Gerber-Shiu function in various risk models. The generalization involves introduction of two new variables in the original penalty function including the surplus prior to ruin and the deficit at ruin. These new variables are the minimum surplus level before ruin occurs and the surplus immediately after the second last claim before ruin occurs. Although these quantities can not be observed until ruin occurs, we can still identify their distributions in advance because they do not functionally depend on the time of ruin, but only depend on known quantities including the initial surplus allocated to the business. Therefore, some ruin related quantities obtained by incorporating four variables in the generalized Gerber-Shiu function can help our understanding of the analysis of the random walk and the resultant risk management. In Chapter 2, we demonstrate the generalized Gerber-Shiu functions satisfy the defective renewal equation in terms of the compound geometric distribution in the ordinary Sparre Andersen renewal risk models (continuous time). As a result, forms of joint and marginal distributions associated with the variables in the generalized penalty function are derived for an arbitrary distribution of interclaim/interarrival times. Because the identification of the compound geometric components is difficult without any specific conditions on the interclaim times, in Chapter 3 we consider the special case when the interclaim time distribution is from the Coxian class of distribution, as well as the classical compound Poisson models. Note that the analysis of the generalized Gerber-Shiu function involving three (the classical two variables and the surplus after the second last claim) is sufficient to study of four variable. It is shown to be true even in the cases where the interclaim of the first event is assumed to be different from the subsequent interclaims (i.e. delayed renewal risk models) in Chapter 4 or the counting (the number of claims) process is defined in the discrete time (i.e. discrete renewal risk models) in Chapter 5. In Chapter 6 the two-sided bounds for a renewal equation are studied. These results may be used in many cases related to the various ruin quantities from the generalized Gerber-Shiu function analyzed in previous chapters. Note that the larger number of iterations of computing the bound produces the closer result to the exact value. However, for the nonexponential bound the form of bound contains the convolution involving usually heavy-tailed distribution (e.g. heavy-tailed claims, extreme events), we need to find the alternative method to reinforce the convolution computation in this case.