Conditioning Community: Power and Decision-Making in Transitioning an Industry-based Community 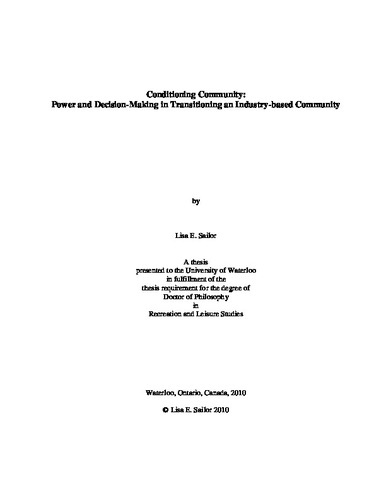 While it is well understood that many resource-based communities are transitioning to tourism to provide a new economic foundation, few studies have probed in-depth the rationale and mechanisms influencing decision-making processes. This case study does that, providing the rationale behind Nanaimo’s City Council’s decision to build a conference centre and in so doing exposes the processes, actors and events that helped framed its decision. A coastal community in British Columbia, Canada, Nanaimo’s downtown suffered continual decline for nearly two decades. In an attempt to reverse the decline, City Council voted 8 to 1 in favour of a conference centre proposal based on its conviction that a centre would serve as a calling card for the community and function to attract both lifestyle residents and tourists. Moreover, Council’s vote signalled its commitment as an active partner in re-establishing the downtown and repositioning Nanaimo as a post-industrial city with high-level infrastructure and amenities. Although there was initial widespread community support, as the conference centre evolved through a series of iterations, one community group surfaced to challenge its merit and the lack of public engagement in the process. In response, another group surfaced to defend the decision. Through a community referendum, the decision was upheld and the community moved forward with the plan. Nonetheless, the viability of the project was threatened a second time with the civic election as several community residents who resisted the project ran for City Council on a platform that would have halted the project. The community, once again, affirmed the decision to proceed. This case has two steps. First, I present a descriptive analysis to illuminate how the community’s social networks played a role in moving a specific agenda forward. There were two phases of data collection from which data were compiled and analysed. The first phase of data collection examined a variety of written documents in the community and principally included minutes of the various City Committees, independent studies commissioned by the City, newspaper accounts, and sources of information provided by the participants. The information collected in this first phase of study helped to inform the 37 in-depth interviews collected in the second phase of the study. Critical discourse analysis was used to demonstrate how and why different groups in the community justified and rationalized an ideological stance supporting a political and economic framework underwritten by tourism. Overall, the strength of the case is in its details. In demonstrating how the social networks and the local coalitions’ capacity-building efforts shaped civic decision-making and public policy, one gains, in a Foucauldian sense, how governmentality played out as different groups engaged in resistant and counter-resistance mechanisms. Tracing these movements reveals how this community was conditioned towards an economic framework underwritten by a political economy of tourism. Moreover, this case demonstrates that although consideration should be given to the broader economic and political climate, it supports claims in the literature that a high degree of autonomy exists within community decision-making processes. Complementing this consideration is the need to theorize more carefully the role of democracy and governance in determining the satisfaction of outcomes. Finally, more consideration should be given by tourism scholars to be more reflexive about their research, its contested and emotive moments.