The Role of the Group Environment in Galaxy Evolution 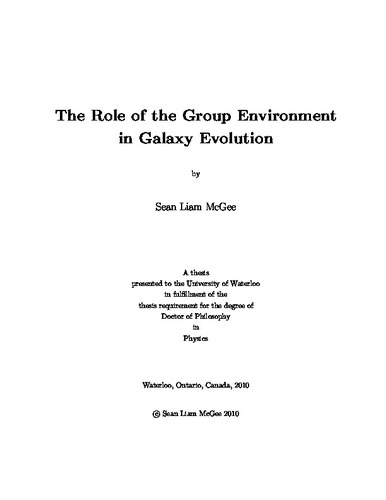 The majority of typically sized galaxies in the local Universe reside in a common dark matter halo with other similar galaxies known as a galaxy group. However, this was not always the case. Nine billion years ago, when the universe was one third its current age, these galaxies were almost exclusively the only massive galaxy in their dark matter haloes. In this thesis, I use both observational and theoretical methods to attempt to understand the effect these galaxy groups have on the evolution of galaxy properties. I examine the morphological and star formation properties of galaxies in redshift selected samples of galaxy groups at two redshift epochs, z=0 and z=0.4. Galaxy groups contain fewer disk galaxies, as determined by quantitative morphology measures, than similar luminosity field galaxies at both redshift epochs. Furthermore, the difference, at fixed luminosity, grows from 6% at z=0.4 to 19% at z=0. The fraction of passive galaxies, as determined from spectral energy distribution fitting of UV and optical photometry, shows similar behaviour. However, at neither redshift do we find that the disk dominated and star forming galaxies in groups have properties which are significantly different from those in the field. The disks in both environments show similar scaling relations and similar distributions of asymmetry. While both group and field star forming galaxies have similar average star formation rates at fixed stellar mass and redshift. These results argue in favor of a relatively gentle physical mechanism of transformation, like strangulation, which removes the hot halo of a galaxy as it falls into a more massive halo. I use a semi-analytic galaxy formation to understand the accretion histories of galaxies which reside in galaxy groups and clusters at different redshift epochs. The use of a simple model for environmental effects finds that the evolution seen in our observations of passive galaxies can be explained if a galaxy becomes passive 3 Gyrs after falling into a dark matter halo which has a mass of greater than 10E13 Msun. Finally, I use two novel methods for exploring how diffuse stellar mass and dust is distributed in and around galaxy groups. These are important probes of the environmental influence on galaxy evolution. By correlating the positions of hostless type Ia supernovae with galaxy groups, I find that as much as half of a galaxy's stellar mass is in a diffuse form outside of galaxies. These means that processes which shred or harass galaxies must be particularly strong in the group environment. I also find that dust is destroyed by the hot gas contained within groups and clusters. Dust is a necessary component of star formation, and its destruction could be an additional mechanism to suppress the production of stars in galaxy groups.