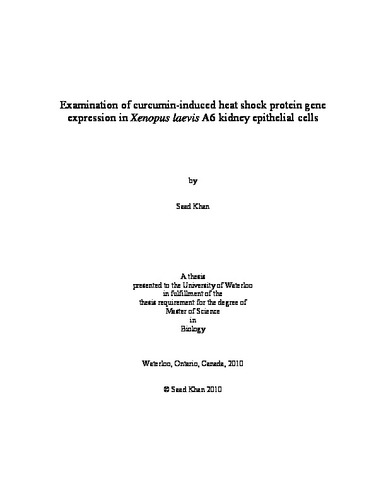 The heat shock response is a cellular homeostatic mechanism that is activated in response to stressful stimuli (e.g. heat shock, heavy metals, disease states etc.), which causes an increase in unfolded protein, which triggers the expression of heat shock protein (hsp) genes. HSPs are molecular chaperones that assist in protein synthesis, folding and degradation and prevent stress-induced protein aggregation. Since stressor-induced tissue damage is associated with different disease states, indirect evidence suggested that HSP inducers may be therapeutically beneficial for certain diseases. Curcumin, a phenolic compound found in the Indian spice, Curcuma longa (Turmeric), was shown to have anti-inflammatory, anti-tumor and anti-amyloid properties. In the present study, it was determined that curcumin inhibited the ubiquitin-proteasome system (UPS) activity and induced the accumulation of HSPs in the frog model system, Xenopus laevis. Treatment of A6 kidney epithelial cells with curcumin enhanced ubiquitinated protein levels and inhibited chymotrypsin-like activity. Furthermore, HSP30 and HSP70 accumulation was observed in cells exposed to 10 - 50 μM curcumin for 24 h in a concentration-dependent manner with maximal levels of HSP30 and HSP70 in cells treated with 30 μM curcumin. Time-dependent increases in HSP30 and HSP70 accumulation were also observed in cells treated with 30 μM curcumin for 2 to 24 h. The accumulation of HSP30 and HSP70 in cells recovering from curcumin exposure increased up to 24 h after treatment. The simultaneous treatment of A6 cells with 10 μM curcumin and mild heat shock (30 ºC) for 6 h resulted in an enhanced accumulation of HSP30 and HSP70, which was greater than with each stressor alone. This pattern of combined stressor-induced HSP30 and HSP70 accumulation increased from 2 to 6 h, after which it decreased from 10 to 24 h. The activation of HSF1 may be involved in curcumin-induced hsp gene expression in A6 cells since KNK437, a heat shock factor-1 inhibitor, inhibited the accumulation of HSP30 and HSP70. Immunocytochemical analysis employing the use of laser scanning confocal microscopy (LSCM) revealed that curcumin-induced HSP30 was detectable primarily in the cytoplasm in a punctate pattern with minimal detrimental effects on the actin cytoskeleton. Elevation of the incubation temperature from 22 to 30 °C greatly enhanced the curcumin-induced cytoplasmic accumulation of HSP30 in a granular pattern. Lastly, curcumin treatment also conferred a state of thermotolerance in A6 cells such that they were able to maintain proper actin cytoskeleton in subsequent thermal challenges. This phenomenon was controlled at the transcriptional level since pretreatment of cells with KNK437, repressed HSP30 accumulation and cytoprotection. These findings are of importance given the interest in identifying agents that can upregulate HSP levels with minimal effects on cell structure or function as a therapeutic treatment of certain protein folding diseases.