Cardiovascular responses of women to orthostatic stress, the effects of the menstrual cycle and age, and a comparison to men 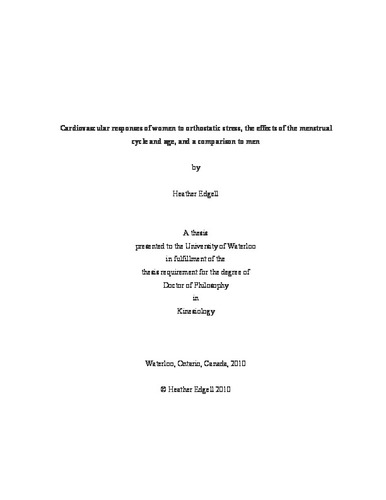 Young women are known to exhibit a greater incidence of orthostatic hypotension than men. The exact mechanisms for this are unclear and it has been proposed to be related to cardiac filling, peripheral resistance, and/or regional blood pooling. The sexually dimorphic effects of lower body negative pressure (LBNP) or upright posture were investigated throughout this study. Women could experience these changes due to effects of the sex hormones estrogen and progesterone. Chapters 3 and 4 in this thesis investigated the responses of women to LBNP in both the follicular and the luteal phase of the menstrual cycle (and age-matched men). Women at these points of the cycle have approximately equal levels of estrogen with high levels of progesterone in the luteal phase. Furthermore, Chapter 5 investigated the responses of pre-menopausal and post-menopausal women (and age-matched men) to sitting and standing. These studies will help to explain the effects of female sex hormones on cardiovascular responses to simulated or real orthostatic stress. LBNP simulates an orthostatic stress by causing a caudal fluid shift and was used in Chapters 3 and 4 as a stimulus to optimize the position of the participants for cardiovascular measurements. A supine-to-sit-to-stand test (i.e. actual orthostatic stress) was used in Chapter 5 as a stimulus. Head-down bed-rest (HDBR) is a model used to simulate microgravity and induces a fluid shift away from the legs towards the head. It has been shown to augment the responses to LBNP and was thus used to enhance the cardiovascular and hormonal responses of men and women to LBNP. A seated control (SEAT) was also used in an attempt to control for the equivalent period of inactivity and circadian rhythm. Blood pressure responses to LBNP were not different between menstrual phases although the physiological mechanisms may be somewhat different. Women in the luteal phase had higher portal vein resistance index which would contribute to moving splanchnic blood pools to maintain venous return during an orthostatic stress. When comparing women in the follicular phase to men, there was a decrease of blood pressure in women during LBNP which was not observed in men. This decrease was likely a result of reduced venous return as evidenced by a greater loss of central venous pressure and a greater increase of thoracic impedance during LBNP. This could have been a result of 1) splanchnic blood pooling in women as men had a greater increase of portal vein resistance index during LBNP, and/or 2) attenuated activation of the renin-angiotensin-aldosterone pathway in women during LBNP. After considering the effects of circadian rhythm and inactivity in all participants, HDBR resulted in 1) higher heart rate with a greater increase during LBNP, 2) a greater decrease of stroke volume during LBNP, 3) a greater increase of thoracic impedance during LBNP, 4) smaller inferior vena cava diameter, 5) lower norepinephrine, and 6) lower blood volume. These changes indicate that after 4-hours of HDBR resting venous return and venous return during LBNP was lower in all participants. However, the mechanisms by which each sex or menstrual phase responded were different. After HDBR men had higher pelvic impedance, higher vasopressin, and higher endothelin-1 compared to women in the follicular phase. After HDBR women in the luteal phase also had higher vasopressin and higher pelvic impedance compared to women in the follicular phase. During the supine-to-sit-to-stand protocol young women (follicular phase) exhibited a greater increase of heart rate during the 3rd minute of each posture likely due to reduced stroke volume compared to young men and post-menopausal women. During the transitions to sitting or standing young women also had an impaired ability to maintain stroke volume and cardiac output compared to post-menopausal women and age-matched men. These results imply that young women had lower venous return than older women and age-matched men during an orthostatic stress. In comparison to older men, post-menopausal women also had slightly reduced venous return, but the difference was smaller than that seen in the younger groups. There were no differences in middle cerebral artery blood flow velocity when comparing younger and older groups of men and women. The results of this investigation have outlined how men respond to an orthostatic stress differently than women (i.e. via a decrease in splanchnic pooling and a greater increase of vasoconstrictors), and have helped to outline a role for female sex hormones in the cardiovascular responses to an orthostatic stress (i.e. post-menopausal women exhibit greater venous return during an orthostatic stress compared to younger cycling women).

Heather Edgell (2010). Cardiovascular responses of women to orthostatic stress, the effects of the menstrual cycle and age, and a comparison to men. UWSpace. http://hdl.handle.net/10012/5334