Exploiting Structure in Backtracking Algorithms for Propositional and Probabilistic Reasoning 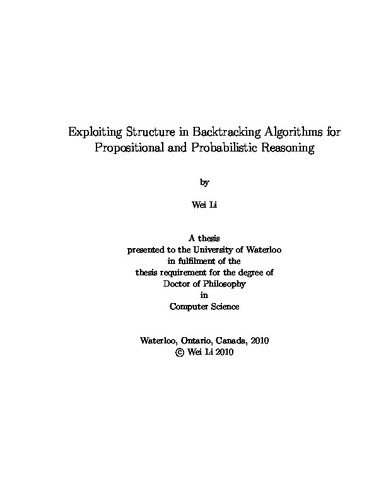 Boolean propositional satisfiability (SAT) and probabilistic reasoning represent two core problems in AI. Backtracking based algorithms have been applied in both problems. In this thesis, I investigate structure-based techniques for solving real world SAT and Bayesian networks, such as software testing and medical diagnosis instances. When solving a SAT instance using backtracking search, a sequence of decisions must be made as to which variable to branch on or instantiate next. Real world problems are often amenable to a divide-and-conquer strategy where the original instance is decomposed into independent sub-problems. Existing decomposition techniques are based on pre-processing the static structure of the original problem. I propose a dynamic decomposition method based on hypergraph separators. Integrating this dynamic separator decomposition into the variable ordering of a modern SAT solver leads to speedups on large real world SAT problems. Encoding a Bayesian network into a CNF formula and then performing weighted model counting is an effective method for exact probabilistic inference. I present two encodings for improving this approach with noisy-OR and noisy-MAX relations. In our experiments, our new encodings are more space efficient and can speed up the previous best approaches over two orders of magnitude. The ability to solve similar problems incrementally is critical for many probabilistic reasoning problems. My aim is to exploit the similarity of these instances by forwarding structural knowledge learned during the analysis of one instance to the next instance in the sequence. I propose dynamic model counting and extend the dynamic decomposition and caching technique to multiple runs on a series of problems with similar structure. This allows us to perform Bayesian inference incrementally as the evidence, parameter, and structure of the network change. Experimental results show that my approach yields significant improvements over previous model counting approaches on multiple challenging Bayesian network instances.