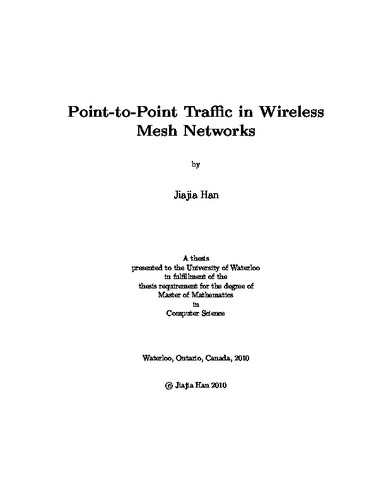 Although most work on Wireless Mesh Networks (WMNs) has focused on traffic flowing in and out of the network via gateways, traffic within the WMN may also be significant in many environments. This point-to-point (P2P) traffic between the nodes within WMN can be handled in different ways, particularly in WMNs containing multiple gateways. The approach used affects the performance of both the P2P flows and other traffic in the network. This work studies the impact of handling P2P traffic in the presence of gateways and gateway traffic. Through mathematical analysis of the resulting traffic patterns, along with extensive simulations, the need to route P2P traffic appropriately is demonstrated. While direct routing yields considerable performance improvements in small networks, it can actually decrease capacity in larger networks. Consequently, we extend the Hybrid Wireless Mesh Protocol (HWMP) proposed in IEEE 802.11s by adding two new message types to obtain more information useful for choosing the best route. Through simulations on different networks, HWMP shows better average delivery ratio and end-to-end delay than the original gateway-based and the P2P routing mechanisms in the simulation settings.