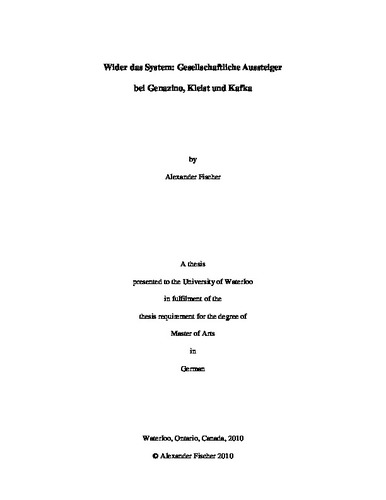 This thesis deals with the sociological conception of the dropout (Aussteiger) figure in Wilhelm Genazino’s Ein Regenschirm für diesen Tag (2001) and, in terms of the history of ideas, his predecessors in Heinrich von Kleist’s Michael Kohlhaas (1808) and Franz Kafka’s Die Verwandlung (1913). It discusses if and how Genazino’s protagonist represents a new contemporary dropout model, and discusses the extent to which such figures can be read as dropouts, how their individual dropout characteristics are designed and motivated, and which factors connect these central characters to each other. According to Christian Schüle and his “21 Fragmente über die Identität des Aussteigers” no one can better provide a picture of the state of a society than someone who intentionally exits from it. Thus, the essential process of dropping out is described. If someone is dropping out, he is reacting to circumstances; to what extent he reacts is, however, uneven. There is no prototype of a dropout. To grasp this highly complex and little investigated phenomenon, several sociological concepts are employed, such as assimilation, deviant behaviour, alienation, individualism and the aspect of self-realization. Niklas Luhmann’s Protest serves as another theoretical basis for the concept of dropping-out (Aussteigertum). His book focuses on how protesters choose themes that none of society’s systems would recognize as their own and thereby mirror the state of things in the society as they really are. The thesis then shows how the action of all three protagonists can be associated with these sociological concepts and how Genazino’s character in Ein Regenschirm für diesen Tag is related to previous protagonists such as Kohlhaas and Samsa. Kleist’s “gebrechliche Einrichtung der Welt” becomes the alienated world of Gregor Samsa and turns into Genazino’s “Gesamtmerkwürdigkeit des Lebens” in which melancholia and succussion bring the protagonist near to failing. The experimental setting all three authors use brings to mind the philosophical stream of Existentialism, on which they all seem to verge. Under societal pressure, all three figures begin to protest against their related situations in different ways. Because of having to submit himself to the exigencies of the society, Genazino’s protagonist feels as if he has to degenerate. To escape from these feelings he continuously walks physically through his environment and at the same time applies a philosophy of sight: as a reflective observer in the river of everyday life, as a swimmer against the tide of boredom, he drops out of society in his own way, different from the way Kohlhaas and Samsa did, but still related to them.