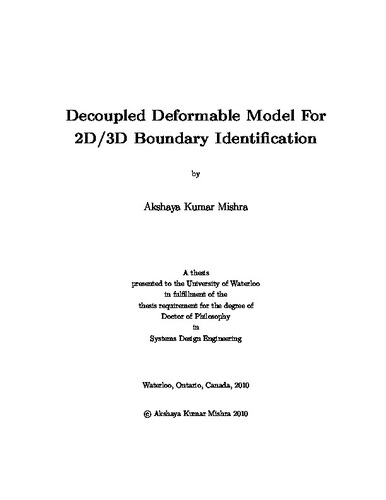 The accurate detection of static object boundaries such as contours or surfaces and dynamic tunnels of moving objects via deformable models is an ongoing research topic in computer vision. Most deformable models attempt to converge towards a desired solution by minimizing the sum of internal (prior) and external (measurement) energy terms. Such an approach is elegant, but frequently mis-converges in the presence of noise or complex boundaries and typically requires careful semi-dependent parameter tuning and initialization. Furthermore, current deformable model based approaches are computationally demanding which precludes real-time use. To address these limitations, a decoupled deformable model (DDM) is developed which optimizes the two energy terms separately. Essentially, the DDM consists of a measurement update step, employing a Hidden Markov Model (HMM) and Maximum Likelihood (ML) estimator, followed by a separate prior step, which modifies the updated deformable model based on the relative strengths of the measurement uncertainty and the non-stationary prior. The non-stationary prior is generated by using a curvature guided importance sampling method to capture high curvature regions. By separating the measurement and prior steps, the algorithm is less likely to mis-converge; furthermore, the use of a non-iterative ML estimator allows the method to converge more rapidly than energy-based iterative solvers. The full functionality of the DDM is developed in three phases. First, a DDM in 2D called the decoupled active contour (DAC) is developed to accurately identify the boundary of a 2D object in the presence of noise and background clutter. To carry out this task, the DAC employs the Viterbi algorithm as a truncated ML estimator, curvature guided importance sampling as a non-stationary prior generator, and a linear Bayesian estimator to fuse the non-stationary prior with the measurements. Experimental results clearly demonstrate that the DAC is robust to noise, can capture regions of very high curvature, and exhibits limited dependence on contour initialization or parameter settings. Compared to three other published methods and across many images, the DAC is found to be faster and to offer consistently accurate boundary identification. Second, a fast decoupled active contour (FDAC) is proposed to accelerate the convergence rate and the scalability of the DAC without sacrificing the accuracy by employing computationally efficient and scalable techniques to solve the three primary steps of DAC. The computational advantage of the FDAC is demonstrated both experimentally and analytically compared to three computationally efficient methods using illustrative examples. Finally, an extension of the FDAC from 2D to 3D called a decoupled active surface (DAS) is developed to precisely identify the surface of a volumetric 3D image and the tunnel of a moving 2D object. To achieve the objectives of the DAS, the concepts of the FDAC are extended to 3D by using a specialized 3D deformable model representation scheme and a computationally and storage efficient estimation scheme. The performance of the DAS is demonstrated using several natural and synthetic volumetric images and a sequence of moving objects.