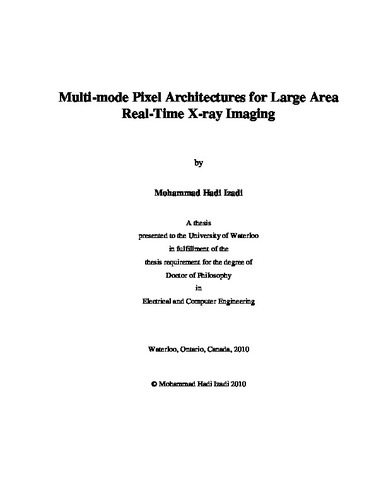 The goal of this work is to extend the state-of-the-art in digital medical X-ray imaging as it pertains to real-time, low-noise imaging and multi-mode imager functionality. One focus of this research in digital flat-panel imagers is to increase the detective quantum efficiency, particularly at low X-ray exposures, in order to enable low-noise imaging applications such as fluoroscopy or tomographic mammography. Another focus of this research is in the creation of a multi-mode imager, such as a combined radiographic and fluoroscopic (R&F) imager, which will reduce hospital costs, both in terms of equipment acquisition and storage space. To that end, we propose a novel three-transistor multi-mode digital flat-panel imager with a dynamic range capable for use in R&F applications, with a particular focus on noise optimization for low-noise real-time digital flat-panel X-ray fluoroscopy. This work involves the derivation and optimization of the total input referred noise of an active pixel sensor (APS) in terms of the on-pixel thin-film transistor device dimensions. It is determined that in order to minimize noise, all non-transistor capacitances at the pixel sense node needed to be minimized. This leads to a design where the on-pixel storage capacitance is eliminated; and instead the gate capacitance of the sense-node transistor is used to store the incoming X-ray converted charge. This work allows researchers to gain insight into the fundamental noise operation of active pixels used in medical imaging, and to appropriately choose device dimensions. Due to the inherent large feature sizes of thin-film transistors, active pixel flat-panel X-ray medical imagers offer lower resolution than their film-screen counterparts. By demonstrating the desirability of smaller device dimensions for reduced noise and the elimination of a storage capacitor, this research frees some of the area constraints that exist in active pixel flat-panel imagers, allowing for smaller pixels, and thus higher resolution medical imagers. The noise analysis and optimization as a function of pixel TFT device dimensions in this work is applicable to any amorphous silicon (a-Si) based charge-sensitive pixel, and is easily extended to other device technologies such as polysilicon (poly-Si). iv In addition, experimental results of a 64x64 pixel four-transistor APS imaging array fabricated in a-Si technology and mated with an a-Se photoconductor for use in medical X-ray imaging is presented. MTF results and transient response in the presence of X-rays (image lag) for the APS array are poor, which is ascribed to high charge trapping at the silicon nitride/a-Se interface. Improvements to the silicon nitride passivation layer and pixel layout are suggested to reduce this charge trapping. The prototype imager is compared directly with a state-of-the-art a-Si PPS imaging array and demonstrates good SNR performance for X-ray exposures down to 1.5μR. Pixel design and fabrication process improvements are suggested for low-exposure APS testing and improved low-noise performance.