The Comics Other: Charting the Correspondence Between Comics and Difference 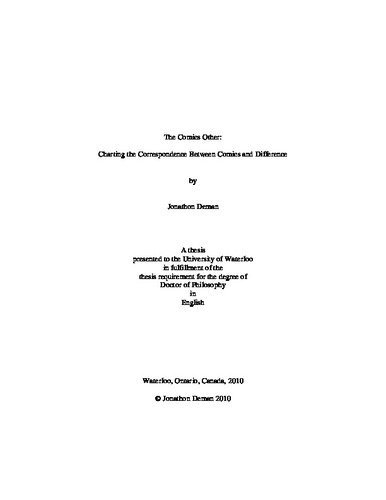 My research demonstrates how Othering practices affect the cultural status of the comics form. Comics frequently rely upon Othering practices such as stereotype when representing minority characters. This tendency contributes to the low cultural status of comics throughout the better part of the last century. In recent years, however, comics artists have cultivated revisioning techniques that challenge the use of Othering practices in comics. These efforts represent an important step in the push toward what is now known as the comics-as-literature movement, which Scott McCloud believes will allow the next generation of comics readers and artists to accept the idea that “comics can yield a body of work worthy of study and meaningfully represent the life, times and world-view of its author” (Reinventing 10). Even as Othering practices in comics create negative perceptions, these same practices, ironically, provide comics artists with the necessary mechanisms to undermine or revise these negative perceptions and to move comics into the literary arena. The primary mechanism that I focus on in this project is the denotation/connotation relationship. In “Rhetoric of the Image,” Roland Barthes -- speaking about advertising images -- suggests that “the denoted image naturalizes the symbolic message, it innocents the semantic artifice of connotation” (“Rhetoric” 45). Building on Barthes’ work, I demonstrate how the comics image uses the denotative component in visual representations of minorities to naturalize symbolic messages (connotations) that project inferiority. This is how comics create and perpetuate Otherness. At the same time, by interrogating the denotation/connotation relationship, contemporary comics artists have been able to undermine this naturalization process and expose the misconceptions that are inherent within representations of the Other in comics. When comics commonly adopt Othering practices, they create what Charles Hatfield refers to as “encrusted connotations” (4), where the reader’s experience of a comics work is deeply affected by the social perceptions that surround comics in general. When the treatment of minorities in comics is based upon outdated stereotypes, for example, readers may assume that comics are a popular art form without literary aspirations, and the readers then treat these comics accordingly. Conversely, when comics artists challenge the encrusted connotations of the form, they undermine these connotations and open the comics readers’ eyes to the possibility that comics can indeed yield a body of work worthy of study. As I demonstrate, this revisioning work of contemporary comics artists is an important component of the comics-as-literature movement. In order to prove this, my work isolates three distinct forms of Othering that comics speak to in a prominent way. By studying the manner in which comics represent women, racial minorities and geeks, I develop the pattern by which Othering practices contribute to the cultural status of comics art. Each chapter isolates touchstone texts with regard to minority representation (Wonder Woman as gender representation, Happy Hooligan and Luke Cage as racial representation, Clark Kent as geek representation, etc.) in order to establish the formation of encrusted connotations that can then be seen across the medium as a whole. I then show how some of the most prominent and critically acclaimed comics literature of the past twenty years (Maus, Jimmy Corrigan, Persepolis, etc.) enters into a self-reflexive dialogue with these encrusted connotations in order to move beyond them and to help transition the form toward a higher cultural status.

Jonathon Deman (2010). The Comics Other: Charting the Correspondence Between Comics and Difference. UWSpace. http://hdl.handle.net/10012/5304