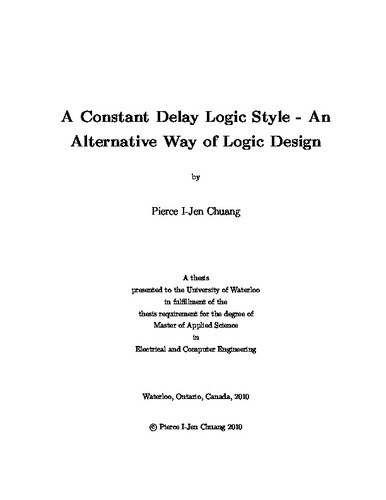 High performance, energy efficient logic style has always been a popular research topic in the field of very large scale integrated (VLSI) circuits because of the continuous demands of ever increasing circuit operating frequency. The invention of the dynamic logic in the 80s is one of the answers to this request as it allows designers to implement high performance circuit block, i.e., arithmetic logic unit (ALU), at an operating frequency that traditional static and pass transistor CMOS logic styles are difficult to achieve. However, the performance enhancement comes with several costs, including reduced noise margin,charge-sharing noise, and higher power dissipation due to higher data activity. Furthermore, dynamic logic has gradually lost its performance advantage over static logic due to the increased self-loading ratio in deep-submicron technology (65nm and below) because of the additional NMOS CLK footer transistor. Because of dynamic logic's limitations and diminished speed reward, a slowly rising need has emerged in the past decade to explore new logic style that goes beyond dynamic logic. In this thesis a constant delay (CD) logic style is proposed. The constant delay characteristic of this logic style regardless of the logic expression makes it suitable in implementing complicated logic expression such as addition. Moreover, CD logic exhibits a unique characteristic where the output is pre-evaluated before the inputs from the preceding stage is ready. This feature enables performance advantage over static and dynamic logic styles in a single cycle, multi-stage circuit block. Several design considerations including appropriate timing window width adjustment to reduce power consumption and maintain sufficient noise margin to ensure robust operations are discussed and analyzed. Using 65nm general purpose CMOS technology, the proposed logic demonstrates an average speed up of 94% and 56% over static and dynamic logic respectively in five different logic expressions. Post layout simulation results of 8-bit ripple carry adders conclude that CD-based design is 39% and 23% faster than the static and dynamic-based adders respectively. For ultra-high speed applications, CD-based design exhibits improved energy, power-delay product, and energy-delay product efficiency compared to static and dynamic counterparts.