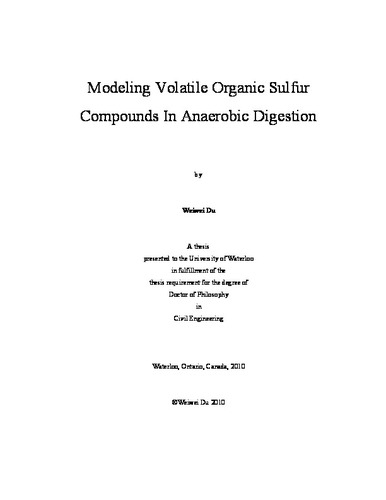 Anaerobic digestion is a common process for treatment of wastewater sludge from municipal sewage systems. Volatile sulfur compounds, including volatile organic sulfur compounds (VOSCs) and hydrogen sulfide, have been reported as the most odorous compounds in digestion emissions and impurities which can damage facilities for generation, transportation, storage, and utilization of biogas. There has been no comprehensive study on biological generation and degradation kinetics of VOSC or modeling VOSC behaviors through anaerobic sludge digestion. The goal of the present study was to establish a model for VOSC conversions in anaerobic sludge digestion which could facilitate quantitative analysis of VOSC emissions in anaerobic digestion. VOSCs and methionine were employed in dosed batch tests. VOSC conversion processes in anaerobic methionine digestion have been identified. The kinetics for the identified VOSC degradation and conversion processes were determined at 35 and 55 °C respectively. Mixed-second order kinetics were found to best fit the conversion processes. A model was established based on the identified processes and estimated kinetic constants. To extend the model to VOSC release in anaerobic sludge digestion, mesophilic and thermophilic incubations were conducted with four different sludge samples. The effects of temperature and sludge source on VOSC release patterns were assessed. It was found that an unidentified DMS generation mechanism was triggered in the mesophilic incubation of activated sludge in which iron was dosed. To apply the model which was established based on methionine degradation in sludge digestion, hydrolysis of particulate materials was incorporated. The model simulations for VOSC behavior in thermophilic batch incubation were able to represent the observed VOSC releases. However, the simulations could not well fit the observed VOSC release at 35 ° because the model did not include the unidentified DMS generation mechanism. Application of the model to bench-scale digesters was lack-of-fit. It may have been due to imprecise estimation of the degradable sulfur in the feed sludge. In addition, in the batch tests and digester operation the ratios of the raw and digested sludge were different. This might have resulted in different concentrations of the microorganisms which mediated biotransformations and hence resulted in different kinetic constants.