A Geochemical Study of the Mineralization at the Hopper Property, Yukon: A Case Study of an Atypical Copper Occurrence 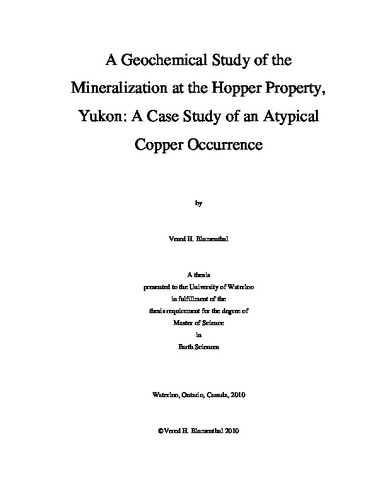 The Hopper property is located in the Yukon Tanana terrane in the southwestern Yukon. It is characterized by granodiorite-hosted copper and molybdenum mineralization that is related to propylitic alteration and shearing. The focus of this study is to develop a genetic model for the copper mineralization based on field, petrographic and geochemical analyses. The mineralization zone is roughly 500 m long and 20 m wide and is hosted in a granodiorite of calc-alkaline affinity interpreted to be part of the Ruby Range batholith which intruded the Aishihik metamorphic suite. The intrusion took place during the late Cretaceous based on U and Pb analyses of zircons with laser ablation inductively-coupled plasma mass spectrometer, placing it in the same time frame as the intrusion hosting the Casino mineralization, the largest porphyry copper deposit in the Yukon. The mineralization consists of chalcopyrite and molybdenite found along fractures, as disseminations and on shearing surfaces. Sulphur isotopes from chalcopyrite and pyrite range from -1.7 to -0.8 per mil suggesting it is ortho-magmatic in origin. The chemical compositions of biotite and amphibole of the Hopper intrusion resemble mineral chemistry of known porphyry systems. Biotites from both Hopper and Casino exhibit Mg-Cl avoidance and have similar values of MnO, TiO2, Al2O3, BaO, Na2O and K2O, and amphiboles range in composition between magnesio-hornblende and actinolite, similar to other porphyry copper type deposits. There are two distinct populations of titanite in the Hopper intrusion, magmatic and hydrothermal. Magmatic titanites are euhedral and are in sharp, planar contact with other magmatic phases, whereas hydrothermal titanites are anhedral and are associated with alteration minerals and the mineralization. Both populations show substitution between Ti and Al+Fe+Nb+Zr+Ce+Y. The hydrothermal titanites are richer in Ti, Cu, and Cr compared to the magmatic ones that are more enriched in Mo suggesting the mineralization is ortho-magmatic in origin. Sulphur isotopes analyses suggest Hopper could be a porphyry type mineralization. However, the mineralization was also found to be related with propylitic alteration, shearing and depletion in Si and K, indicating this is not a typical system. Therefore, two possible models can explain the copper occurrence at Hopper. According to the first model, the mineralization is ortho-magmatic and is part of a porphyry system, but it has been remobilized to the propylitic zone. A second model is that the mineralization is much younger than the intrusion and is related to shearing.

Vered Hagit Blumenthal (2010). A Geochemical Study of the Mineralization at the Hopper Property, Yukon: A Case Study of an Atypical Copper Occurrence. UWSpace. http://hdl.handle.net/10012/5299