Resident Attitudes towards Tourism Development in Conservative Cultures: The Case of Qatar 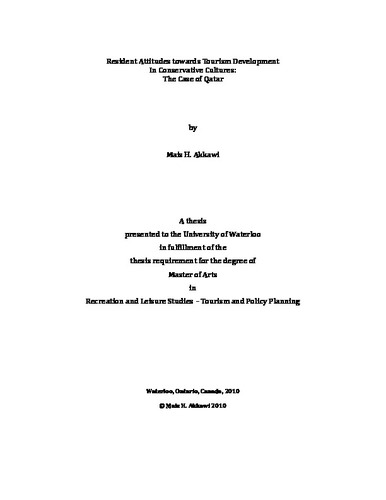 Over the past decade, Persian Gulf countries witnessed an increase in tourism development and the number of international tourists. Though tourism development plays an important role in enhancing economies, tourism development may conflict with the region's conservative traditions and culture. The purpose of this research is to identify the attitudes and perceptions of residents in the State of Qatar towards the impacts of tourism development by: 1) applying Ap & Crompton's (1998) Index of Tourism Impacts (ITI): measuring the physical/ecological/social or cultural environments, and the residents' acceptance of visitors, 2) by identifying resident attitudes as expressed on Qatari-based social networks, and 3) through personal observation of resident attitudes. Respondents were selected using a convenience sampling technique to complete a survey instrument. Non-intrusive personal observation was also carried out to observe the nature of host-guest interactions at local tourist areas. Material regarding resident attitudes towards tourism development published through local media and forums on local social networks were collected. Descriptive statistics, factor analysis, and independent t-tests were used to describe data and to better understand resident attitudes towards the ITI dimensions. Content analysis was used to analyze forum entries, and field note extracts of personal observations were also used to present observed behaviours of residents. Survey findings reveal that resident attitudes differed according to respondents' age, length of residence, and ethnicity, particularly with respect to perceptions of change in local services and natural environment. The content analysis of forums revealed mixed feelings by residents (primary expatriates) towards tourism development. An attitude typology was derived from resident attitudes expressed through forum entries. Attitudes ranged from “denying tourism's existence” to “encouraging tourism”. Field observation of behaviours also revealed mixed attitudes towards the presence and behaviours of tourists, where residents either “accepted tourism” or “disapproved tourism”. Results suggested further research be carried out in testing the attitude typology in countries within the same region, and to modify the belief scale items and dimensions.