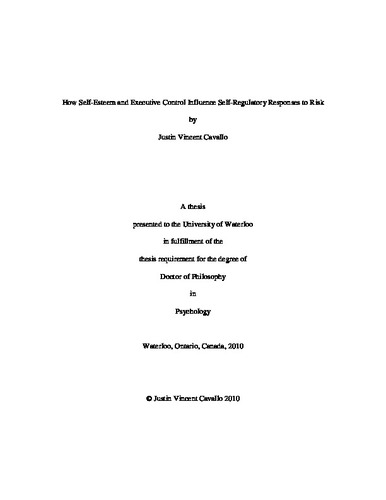 People with high (HSEs) and low self-esteem (LSEs) often react differently to interpersonal risk. When concerns about their relationship are salient, HSEs seek connection with their partners to quell feelings of vulnerability whereas LSEs distance themselves from their partners to minimize the impact of potential rejection. In the present research, I investigate the extent to which these regulatory dynamics reflect executive-based processes that govern broader regulatory responses. In Studies 1 and 2, HSEs exhibited stronger approach goals (i.e., a greater tendency to pursue rewards and ignore risks) in non-social domains when faced with interpersonal risk whereas LSEs inhibited approach goals and made more conservative decisions. In Studies 3 and 4, I demonstrated that HSEs’ and LSEs’ divergent regulatory responses to risk were contingent on executive control. When participants were cognitively busy, HSEs were less likely to bolster relationship evaluations in the face of interpersonal risk whereas LSEs were more likely to do so. Finally, Study 5 demonstrated that these global regulatory strategies govern HSEs’ and LSEs’ responses to non-interpersonal risk as well. HSEs were more willing to engage in risky social comparison following failure than they were when they received neutral feedback about their performance, whereas LSEs were less willing to compare themselves with others after failure. These effects did not emerge when cognitive resources were depleted. Taken together, the results suggest that HSEs’ and LSEs’ self-regulatory responses to risk are broader and more controlled than previously theorized.