Emergence and Phenomenology in Quantum Gravity 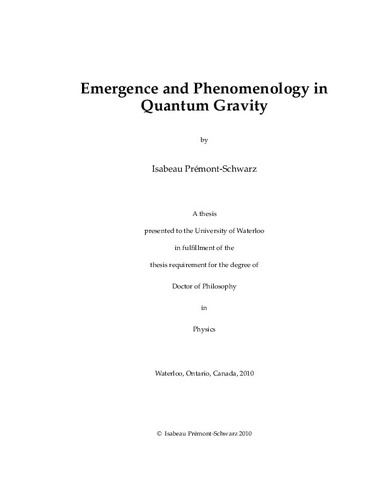 In this thesis we investigate two approaches to quantum gravity. The first is the emergence of gravity from a discrete fundamental theory, and the second is the direct quantisation of gravity. For the first we develop tools to determine with relatively high accuracy the speed of propagation of information in collective modes which ultimately should give us some information about the emergent causal structure. We found a way of finding the dependence on the relative interaction strengths of the Hamiltonian and we also managed to calculate this speed in the case where the operators in the Hamitonian were not necessarily bounded. For the second approach, we investigated the phenomenology of Loop Quantum Gravity. We found that ultra light black holes (lighter than the Planck mass) have interesting new properties on top of being non-singular. First their horizon is hidden behind a Plancksized wormhole, second their specific heat capacity is positive and they are quasi-stable, they take an infinite amount of time evaporate. We investigated the dynamics of their collapse and evaporation explicitly seeing that not only was there no singularity, but there is also no information loss problem. Looking at how primordial black holes were in existence, we found that they might account for a significant portion of dark matter. And if they did, their radiation spectrum is such that the black holes in the dark matter halo of our galaxy could be the source for the ultra high energy cosmic rays we observe on earth.