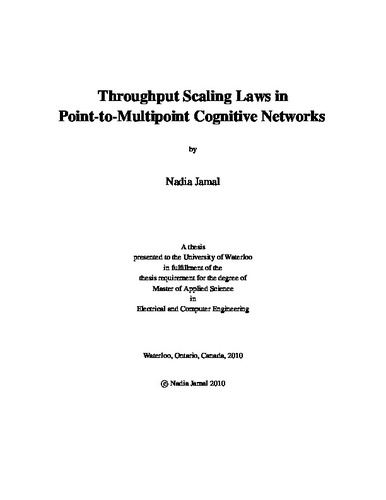 Simultaneous operation of different wireless applications in the same geographical region and the same frequency band gives rise to undesired interference issues. Since licensed (primary) applications have been granted priority access to the frequency spectrum, unlicensed (secondary) services should avoid imposing interference on the primary system. In other words, secondary system’s activity in the same bands should be in a controlled fashion so that the primary system maintains its quality of service (QoS) requirements. In this thesis, we consider collocated point-to-multipoint primary and secondary networks that have simultaneous access to the same frequency band. Particularly, we examine three different levels at which the two networks may coexist: pure interference, asymmetric co-existence, and symmetric co-existence levels. At the pure interference level, both networks operate simultaneously regardless of their interference to each other. At the other two levels, at least one of the networks attempts to mitigate its interference to the other network by deactivating some of its users. Specifically, at the asymmetric co-existence level, the secondary network selectively deactivates its users based on knowledge of the interference and channel gains, whereas at the symmetric level, the primary network also schedules its users in the same way. Our aim is to derive optimal sum-rates (i.e., throughputs) of both networks at each co-existence level as the number of users grows asymptotically and evaluate how the sum-rates scale with the network size. In order to find the asymptotic throughput results, we derive two propositions; one on the asymptotic behaviour of the largest order statistic and one on the asymptotic behaviour of the sum of lower order statistics. As a baseline comparison, we calculate primary and secondary sum-rates for the time division (TD) channel sharing. Then, we compare the asymptotic secondary sum-rate in TD to that under simultaneous channel sharing, while ensuring the primary network maintains the same sum-rate in both cases. Our results indicate that simultaneous channel sharing at both asymmetric and symmetric co-existence levels can outperform TD. Furthermore, this enhancement is achievable when user scheduling in uplink mode is based only on the interference gains to the opposite network and not on a network’s own channel gains. In other words, the optimal secondary sum-rate is achievable by applying a scheduling strategy, referred to as the least interference strategy, for which only the knowledge of interference gains is required and can be performed in a distributed way.