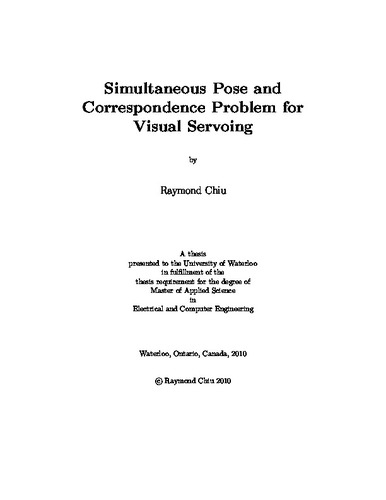 Pose estimation is a common problem in computer vision. The pose is the combination of the position and orientation of a particular object relative to some reference coordinate system. The pose estimation problem involves determining the pose of an object from one or multiple images of the object. This problem often arises in the area of robotics. It is necessary to determine the pose of an object before it can be manipulated by the robot. In particular, this research focuses on pose estimation for initialization of position-based visual servoing. A closely related problem is the correspondence problem. This is the problem of finding a set of features from the image of an object that can be identified as the same feature from a model of the object. Solving for pose without known corre- spondence is also refered to as the simultaneous pose and correspondence problem, and it is a lot more difficult than solving for pose with known correspondence. This thesis explores a number of methods to solve the simultaneous pose and correspondence problem, with focuses on a method called SoftPOSIT. It uses the idea that the pose is easily determined if correspondence is known. It first produces an initial guess of the pose and uses it to determine a correspondence. With the correspondence, it determines a new pose. This new pose is assumed to be a better estimate, thus a better correspondence can be determined. The process is repeated until the algorithm converges to a correspondence pose estimate. If this pose estimate is not good enough, the algorithm is restarted with a new initial guess. An improvement is made to this algorithm. An early termination condition is added to detect conditions where the algorithm is unlikely to converge towards a good pose. This leads to an reduction in the runtime by as much as 50% and improvement in the success rate of the algorithm by approximately 5%. The proposed solution is tested and compared with the RANSAC method and simulated annealing in a simulation environment. It is shown that the proposed solution has the potential for use in commercial environments for pose estimation.