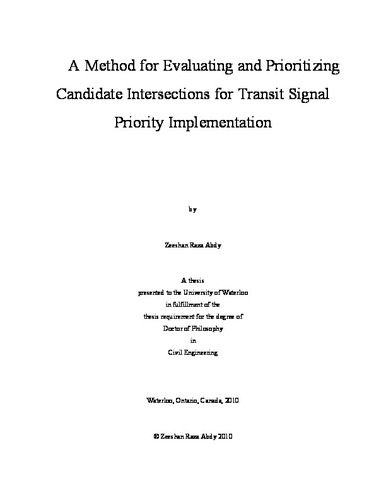 Transit agencies seeking to improve transit service delivery are increasingly considering the deployment of transit signal priority (TSP). However, the impact of TSP on transit service and on the general traffic stream is a function of many factors, including intersection geometry, signal timings, traffic demands, TSP strategies and parameters, transit vehicle headways, timing when transit vehicles arrive at the intersection, etc. Previous studies have shown that depending on these factors, the net impact of TSP in terms of vehicle or person delay can be positive or negative. Furthermore, due to financial constraints, transit agencies are often able to deploy TSP at only a portion of all of the candidate intersections. Consequently, there is a need to estimate the impact of TSP prior to implementation in order to assist in determining at which intersections TSP should be deployed. Currently, the impacts of TSP are often estimated using microscopic simulation models. However, the application of these models is resource intensive and requires specialized expertise that is often not available in-house to transit agencies. In this thesis, an analytical model was proposed for estimating the delay impacts of green extension and early green (red truncation) TSP strategies. The proposed model is validated with analytical model reported in the literature and microscopic simulation model. This is followed by model sensitivity analysis. A software module is developed using the proposed model. The usefulness of the model is illustrated through its application to estimate the TSP performance. Finally, a prioritization is conducted on sixteen intersections with different geometric and operational traffic strategies. The overall results indicate that the proposed model is suitable for both estimating the pre-deployment and post-deployment TSP performance. The proposed model is suitable for implementation within a spreadsheet and requires considerably less effort, and less technical expertise, to apply than a typical micro-simulation model and therefore is a more suitable tool for transit agencies to use for prioritising TSP deployment.