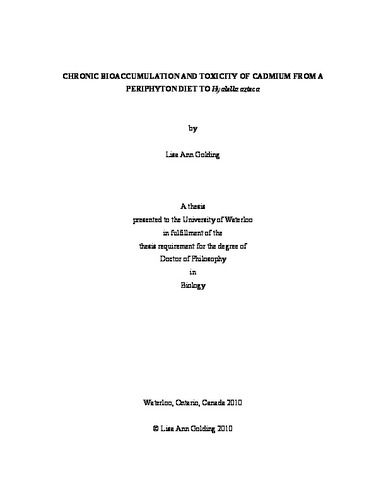 Dietary cadmium (Cd) can contribute significantly to chronic bioaccumulation and toxicity in aquatic organisms. This contribution needs to be quantified so that the relative importance of waterborne and dietary cadmium exposure pathways can be incorporated into protective water quality guidelines and ecological risk assessments. In this research, the contribution of dietary Cd from a natural periphyton diet to chronic (28 d) bioaccumulation and toxicity in the freshwater amphipod Hyalella azteca was quantified using a mechanistically-based saturation bioaccumulation model. Factors that influence dietary Cd bioavailability such as food type, food form, dietary Cd speciation and concentration were investigated. Assimilation efficiency, ingestion rate and the excretion rate constant of dietary Cd were determined for each of these factors. Food nutrition was also considered. Lastly, model predictions of Cd bioaccumulation and toxicity were compared to measurements of tissue concentration and survival when H. azteca were exposed to metal contaminated water and periphyton collected from lakes in the metal mining region of Rouyn-Noranda, Quebec, Canada. In 28 d laboratory experiments where H. azteca bioaccumulated Cd from water and food, dietary Cd was estimated to contribute markedly (21 – 94 %) to bioaccumulated Cd in H. azteca. Effects on chronic survival were best predicted from body concentration rather than water or food exposure concentration. Assimilation efficiency of dietary Cd differed with food type likely as a result of Cd speciation, but did not differ with Cd concentration or food form. Ingestion rate differed with food form while excretion rate constants were unaffected by dietary Cd bioavailability. Predictions of chronic Cd bioaccumulation in H. azteca exposed to field contaminated samples were robust, however the model did not account for effects of water chemistry on Cd bioaccumulation and is thus constrained in its application. Predictions of chronic survival were over-estimated likely due to the additional toxicity caused by the low nutritional quality of the field contaminated periphyton. This research demonstrated that both waterborne and dietary Cd need to be considered in models that assess chronic risk of exposure and effects to H. azteca.