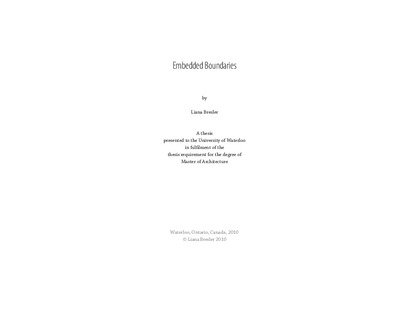 This thesis is an investigation of landscape as boundary: a study of its formation, inhabitation, and symbolic meaning. The study is situated in a valley located south of Jerusalem’s Old City walls; known as both Gei Ben-Hinnom and Wadi al- Rababa, it is an ethnic, cultural, socioeconomical, and mythological boundary. In the ethnically polarized Jerusalem, valleys often act as boundaries between Jewish and Palestinian populations. For nineteen years an official no-man’s-land divided the Hinnom/Rababa Valley, a result of an armistice agreement between Israel and Jordan. Since the 1967 annexation of East Jerusalem to Israel, the valley has transformed into a boundary between the two populations. Responding to this boundary, the thesis addresses an urgent need for a wastewater treatment facility, proposing new infrastructure as a vehicle to explore the ability of architecture to embody multiple narratives. By documenting built form, geology, hydrology, history, and mythology, the thesis illustrates the Hinnom/Rababa Valley as the space of the in-between, neither east nor west, bridging the urban hilltops with the underworld. The boundary partakes in both and neither sides simultaneously. Building on its multiplicity of meanings – of its ‘stories so far’ – the thesis attempts to re-imagine a new relationship to the ground.