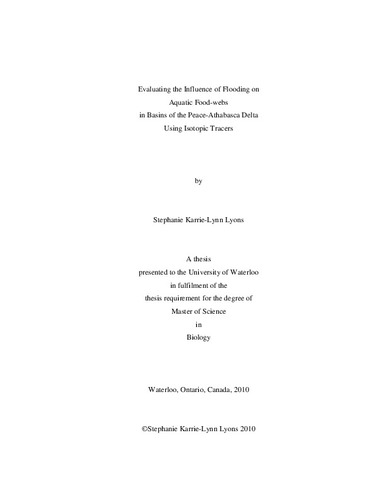 Periodic flooding has been widely believed to serve an important role in maintaining water levels and productivity of aquatic basins in floodplain landscapes. Here, I analyze four basins of contrasting flood frequencies (one through-flow, one pulse-flooded, two non-flooded) and two adjacent river sites in the PAD were sampled during the open-water season of 2007 and spring of 2008 to characterize linkages between hydrological processes (using O and H stable isotopes) and limnological conditions, and to assess how these linkages affect trophic interactions involving the aquatic flora and fauna (using C and N stable isotopes). The water balance and water chemistry of the through-flow basin was dominated at all times by the input of river water which reduced concentrations of nutrients and ions. In contrast, evaporation played an important role in the water balance and concentrated nutrients and ions in the non-flooded basins. Surprisingly, pulse-flood events had short-lived effects on the water balance and carbon stable isotopic signatures of biota. Hydrological and limnological conditions in the pulse-flooded basin were similar to those of the river water shortly after spring flooding. After flooding, evaporation caused rapid increase of δ18O of the water comparable to patterns observed in the non-flooded basins, but recovery of water chemistry variables was delayed. In the non-flooded and pulse-flooded basins, δ13CDIC declined due to atmospheric CO2 invasion under conditions of high primary productivity and pH that generated strong kinetic fractionation. This decline in δ13CDIC values produced the opposite effect compared to when photosynthesis occurs under non-limiting carbon conditions, as occurred in the through-flow basin. This feature provides important new knowledge to improve paleolimnological interpretation of δ13C values of organic matter in sediment cores to track past changes in flooding regimes. Importantly, this study shows that pulse floods exert short-lived transient (~1-2 months) effects of the water balance and carbon dynamics of aquatic food-webs and do not elevate aquatic production, but exert longer lasting (at least an entire open-water season) on water chemistry conditions. This contrasts with previous beliefs that the effects of pulse flooding are more profound and longer lasting.