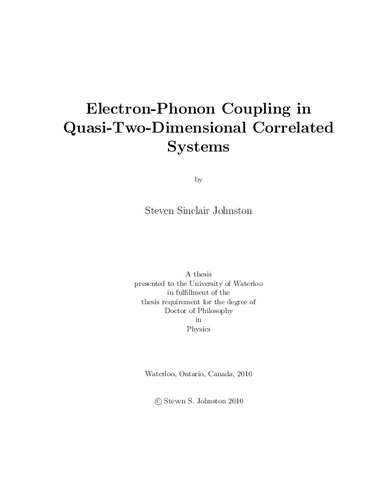 Over the past 20 years a great deal of progress has been made towards understanding the physics of the high-temperature (high-Tc) cuprate superconductors. Much of the low- energy physics of these materials appears to be captured by two-dimensional Hubbard or t-J models which have provided significant insight into a number of properties such as the pseudogap, antiferromagnetism and superconductivity itself. However, intrinsically planar models are unable to account for the large variations in Tc observed across materials nor do they capture the electron-phonon (el-ph) interaction, the importance of which a number of experimental probes now indicate. This thesis examines the el-ph interaction in cuprates using a combination of analytical and numerical techniques. Starting from the microscopic mechanism for coupling to in-plane and c-axis polarized oxygen phonons, the theory of el-ph coupling is presented. The el-ph self-energy is derived in the context of Migdal-Eliashberg theory and then applied to understanding the detailed temperature and doping dependence of the renormalizations observed by Angle-resolved photoemission spectroscopy. The qualitative signatures of el- boson coupling in the density of states of a d-wave superconductor are also examined on general grounds and a model calculation is presented for el-ph coupling signatures in the density of states. Following this, the theory is extended to include the effects of screening and the consequences of this theory are explored. Due to the quasi-2D nature of the cuprates, screening is found to anomalously enhance the el-ph contribution to d-wave pairing. This result is then considered in light of the material and doping dependence of Tc and a framework for understanding the materials variations in Tc is presented. From these studies, a detailed picture of the role of the el-ph interaction in the doped cuprates emerges where the interaction, working in conjunction with a dominant pairing interaction, provides much of the materials variations in Tc observed across the cuprate families. Turning towards numerical techniques, small cluster calculations are presented which examine the effects of a local oxygen dopant in an otherwise ideal Bi2Sr2CaCu2O8+δ crystal. Here, it is demonstrated that the dopant locally enhances electronic properties such as the antiferromagnetic exchange energy J via local el-ph coupling to planar local oxygen vibrations. Finally, in an effort to extend the scope of this work to the underdoped region of the phase diagram, an examination of the properties of the single-band Hubbard and Hubbard-Holstein model is carried out using Determinant Quantum Monte Carlo. Here focus is placed on the spectral properties of the model as well as the competition between the the antiferromagnetic and charge-density-wave orders. As with the small cluster calculations, a strong interplay between the magnetic and lattice properties is observed.