Synthesis and Chemistry of Kinamycins and Related Antibiotics 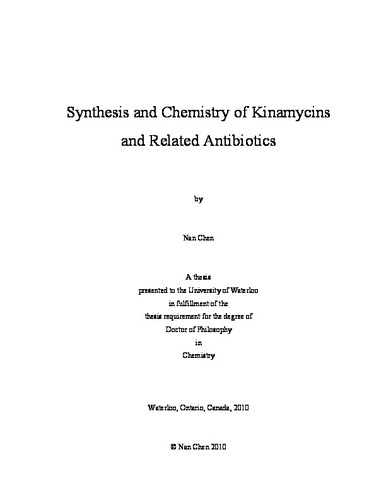 The kinamycin antitumor antibiotics, discovered in Japan in the early 1970s as secondary metabolites of the soil bacterium Streptomyces murayamaensis, were at first believed to be derivatives of the N-cyanobenzo[b]carbazole ring system. In 1994, studies in this laboratory revealed that the initial structural assignment was incorrect. The true structures of the kinamycins are based on a novel diazobenzo[b]fluorene ring system, a fused 6-6-5-6 carbon skeleton bearing an unusually stable diazo moiety along with a para-quinone and other functionalities. Additionally, this group revised the structure of isoprekinamycin (IPK), a metabolite from Streptomyces murayamaensis previously considered to be a fully aromatized diazobenzo[b]fluorene. IPK was shown to be an isomeric diazobenzo[a]fluorene possessing a fused 6-5-6-6 carbon skeleton and incorporating an ortho-quinonediazide moiety. These observations stimulated much research elsewhere in regard to the synthesis and biological activity of these structurally novel natural products. Among the notable discoveries in other groups was the isolation and characterization of the lomaiviticins, metabolites of the marine bacterium Micromonospora lomaivitiensis that are dimeric diazobenzo[b]fluorene analogues, which are even more potent than the kinamycins as anticancer and antibacterial agents. The present project was designed to develop new synthetic methods to improve access to the diazobenzo[b]fluorenes, with a focus on (1R,2R,3R,4S)-11-diazo-1,2,3,4,9-pentahydroxy-2-methyl- 3,4-dihydro-1H-benzo[b]fluorene-5,10-(2H,11H)-dione, also called kinamycin F. The present project was also designed to carry out experimental and theoretical studies to gain insights into the structures and chemical properties of kinamycins, to better understand their biological properties and to identify how such properties might be optimized through specific structural alterations. A synthetic study was carried out on 2-methyl-1,4-naphthoquinone as a model for a possible biomimetic generation of the highly oxygenated D-ring of the kinamycins as found in kinamycin F. Epoxidation of the model quinone, followed by stereoselective reduction of both keto-carbonyl groups and ring opening of the epoxide with acetate as the nucleophile in a novel process involving tetramethylammonium triacetoxyborohydride provided (1R*,2R*,3R*,4S*)-2-methyl-1,2,3,4- tetrahydronaphthalene-1,2,3,4-tetraol in good yield. Comparison of the proton NMR characteristics of the model tetrol with those of the D-ring of kinamycins led to the conclusion that kinamycin F, unlike other kinamycins with some of their D-ring oxygen(s) bearing acyl groups, prefers a D-ring conformation in which the hydroxyl group that is nearest the diazo group is in a pseudo-equatorial orientation such that the C-O bond is approximately parallel with the diazo group. Ab initio molecular orbital calculations at the RHF 6-31G level led to the conclusion, supported by experimental measurements of diazo IR stretching frequencies, that the diazo group of kinamycin F has an enhanced diazonium ion character in this favoured conformation. This observation is of potential significance since the electrophilicity of the diazo group may play a role in the mode-of-action of the kinamycins, and since there is evidence to suggest that the other kinamycins may undergo conversion into kinamycin F in vivo before exerting their biological effect. A strategy for applying the results of the model study to the total synthesis of kinamycin F is disclosed. In addition, the construction of 6-hydroxy-8-methoxy-3-methyl-7,12-dioxo-7,12- dihydrotetraphen-4-yl methanesulfonate from readily available starting materials is described and suggestions as to how this compound might serve as a key intermediate in the biomimetic synthesis of kinamycin F are provided. A critical analysis of this synthetic strategy to the kinamycins in contrast with several other approaches that have been reported by other groups during the course of this thesis research is presented. Additionally it is pointed out that this synthetic method could provide (1S,2R,3R,4R)-5-diazo-1,2,3,4,8-pentahydroxy-3-methyl-1,2,3,4-tetrahydrotetraphene-6,7,12(5H)- trione as a key intermediate, which might well represent a novel analogue of the kinamycins with potentially intrinsic anticancer and antibacterial activity of its own, since this compound possesses a 6-6-6-6 carbon skeleton containing an ortho-quinonediazide that could serve as an unique hybrid between the 6-6-5-6 diazobenzo[b]fluorene and the 6-5-6-6 diazobenzo[a]fluorene systems. A semi-synthetic method for generating kinamycin F from other natural kinamycins by applying a modified Zemplen deacylation condition is reported. Electrospray mass spectrometry was employed to identify products from interaction of kinamycin F with glutathione on a very small scale. Kinamycin F was found to form a covalent adduct with this thiol that is ubiquitous in mammalian cells. A discussion of the potential biological significance of this process as well as possible interactions with other biologically important thiols in specific potential target proteins is provided. A systematic ab initio molecular orbital analysis at the RHF 6-31 G level of the influence of substituents in the aromatic D-ring of isoprekinamycin was also carried out. The results have led to the suggestion of specific structural alterations that might be employed to fine tune the electrophilicity of the diazo group, which might affect the biological activity of such compounds. Despite the very high potency of the lomaiviticins as anticancer and antibacterial agents, progress towards badly needed practical drugs in these areas has been frustrated by a lack of access to adequate quantities of these complex secondary metabolites either through in vitro fermentation or total synthesis at the moment. In the hope that a prediction of the three dimensional properties of the lomaiviticins might inspire the design and synthesis of simpler analogues with comparable biological activities, a systematic ab initio molecular orbital study at the RHF 6-31G level was undertaken. In the end, predictions of the most likely conformations of lomaiviticins A and B were achieved and are provided as potential starting points for medicinal chemists to design simpler but equally potent and much more accessible analogues.