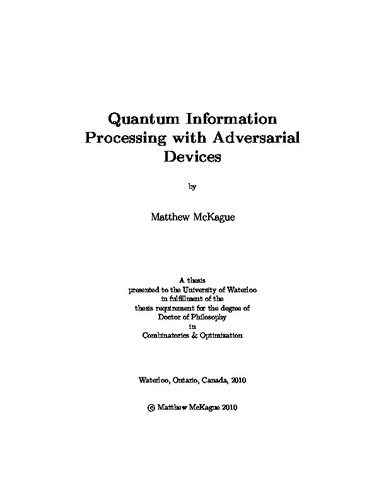 We consider several applications in black-box quantum computation in which untrusted physical quantum devices are connected together to produce an experiment. By examining the outcome statistics of such an experiment, and comparing them against the desired experiment, we may hope to certify that the physical experiment is implementing the desired experiment. This is useful in order to verify that a calculation has been performed correctly, that measurement outcomes are secure, or that the devices are producing the desired state. First, we introduce constructions for a family of simulations, which duplicate the outcome statistics of an experiment but are not exactly the same as the desired experiment. This places limitations on how strict we may be with the requirements we place on the physical devices. We identify many simulations, and consider their implications for quantum foundations as well as security related applications. The most general application of black-box quantum computing is self-testing circuits, in which a generic physical circuit may be tested against a given circuit. Earlier results were restricted to circuits described on a real Hilbert space. We give new proofs for earlier results and begin work extending them to circuits on a complex Hilbert space with a test that verifies complex measurements. For security applications of black-box quantum computing, we consider device independent quantum key distribution (DIQKD). We may consider DIQKD as an extension of QKD (quantum key distribution) in which the model of the physical measurement devices is replaced with an adversarial model. This introduces many technical problems, such as unbounded dimension, but promises increased security since the many complexities hidden by traditional models are implicitly considered. We extend earlier work by proving security with fewer assumptions. Finally, we consider the case of black-box state characterization. Here the emphasis is placed on providing robust results with operationally meaningful measures. The goal is to certify that a black box device is producing high quality maximally entangled pairs of qubits using only untrusted measurements and a single statistic, the CHSH value, defined using correlations of outcomes from the two parts of the system. We present several measures of quality and prove bounds for them.