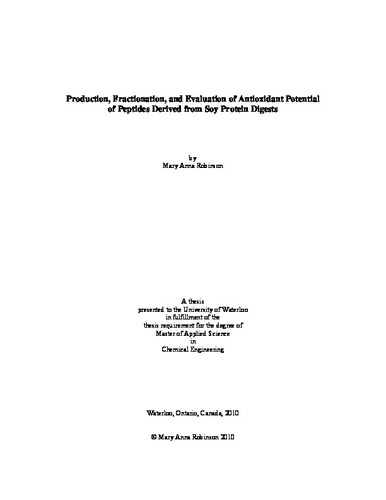 Oxidation plays an important role in the basic processes of life, such as the production of energy and phagocytosis employed by the immune system. However, when an imbalance between oxidants and antioxidants exists in vivo, oxidation can become uncontrolled and result in diseases such as arthritis, cancer, artherosclerosis, and Alzheimer’s Disease. Dietary antioxidants including polyphenolic compounds, proteins, and peptides have been identified as being physiologically functional foods capable of contributing to the restoration of this oxidant-antioxidant balance. The objective of this study was to explore the production of antioxidant soy peptides from a commercially available soy protein isolate (SPI) by enzymatic hydrolysis in a process similar to that occurring in the human digestive tract. In this study Archer-Daniels Midland SPI PRO-FAM 974 was used as a raw material for the production of antioxidant soy peptides. The digestion consisted of enzymatic digestion of the SPI (3.12 wt %) with pepsin (37ºC, pH 1.5) and/or pancreatin (40ºC, pH 7.8) either individually or sequentially. The enzyme concentration and digestion time for each enzyme was optimized using a 2^4 factorial experimental design to produce the greatest concentration of peptides quantified in PheGly equivalents by the OPA assay. A maximum peptide concentration of approximately 65 mM PheGly equivalents was achieved in the follow-up digests resulting from this factorial design model, using pepsin (0.15 g/L, 15 minutes) and pancreatin (4.5 g/L, 120 minutes) sequentially to digest the SPI. Fractionation of the peptides by sequential dead-end membrane ultrafiltration with molecular weight cut-offs (MWCO) of 3 kDa and 1 kDa was performed to produce peptide fractions with increased antioxidant capacity. The permeate flux as a function of time was fit to empirical models, revealing that the membrane fouling resulting in the permeate flux decline is largely reversible and most likely the result of cake filtration. Antioxidant capacity was quantified by the DPPH, FCR, and ORAC assays to determine the electron-donating and proton-donating capacities of the soy peptides. The electron-donating DPPH assay was not suitable to quantify the antioxidant capacity of the soy peptides due to poor peptide solubility in the assay media and sensitivity. The electron-donating FCR assay and the proton-donating ORAC assay were used to distinguish between the ultrafiltration and digestion conditions employed to produce the soy peptides and the antioxidant capacity was quantified in equivalence to the standard antioxidant Trolox. The soy peptide fraction with the greatest antioxidant capacity was produced by enzymatic digestion with pancreatin (4.5 g/L, 120 minutes) alone and had a molecular weight cut-off of between 3 kDa and 1 kDa. This fraction had an equivalent antioxidant capacity of approximately 190 mg Trolox/g sample in the ORAC assay and approximately 180 mg Trolox/g sample in the FCR assay. A preliminary linear model for the optimum digestion and ultrafiltration conditions for the production of antioxidant peptides with the greatest ORAC antioxidant capacity was also developed. The model includes a positive pancreatin digestion time term and a negative pepsin digestion time term. No ultrafiltration terms were found to be significant in this preliminary model, but a large constant term persisted. In conclusion, the enzymatic digestion of commercially available SPI with pancreatin and fractionated by ultrafiltration successfully produced a soy peptide fraction with increased antioxidant capacity.