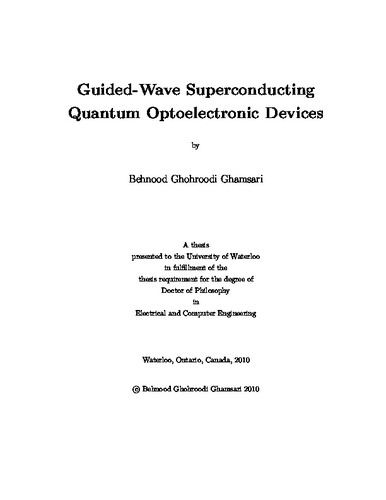 This thesis investigates a novel optoelectronic platform based on the integration of superconductive structures, such as thin films and micro-constrictions, with optical waveguides for ultra-fast and ultra-sensitive devices with applications including high-speed optical communications, quantum optical information processing, and terahertz (THz) devices and systems. The kinetic-inductive photoresponse of superconducting thin films will be studied as the basic optoelectronic process underlying the operation of these novel devices. Analytical formulation for the non-bolometric response is presented, and experimental photodetection in YBCO meander-line structures will be demonstrated. A set of superconducting coplanar waveguides (CPW) are designed and characterized, which support the operation of the devices at microwave frequencies. Microwave-photonic devices comprising a microwave transmission line and a light-sensitive element, such as a meander-line structure, are designed and measured for implementation of optically tunable microwave components. In order to support low-loss and low-dispersion propagation of millimeter-wave and THz signals in ultra-fast and wideband kinetic-inductive devices, surface-wave transmission lines are proposed, incorporating long-wavelength Surface Plasmon Polariton (SPP) modes in planar metal-dielectric waveguides. The theory of superconducting optical waveguides, including analytical formulation and numerical methods, is developed in detail. The implementation of superconducting optical waveguides is discussed thoroughly, employing conventional dielectric-waveguide techniques as well as optical SPP modes. Superconductive traveling-wave photodetectors (STWPDs) are introduced as a viable means for ultra-fast and ultra-sensitive photodetection and photomixing. A modified transmission line formalism is developed to model STWPDs, where light is guided through an optical waveguide and photodetection is distributed along a transmission line. As an appendix, a systematic approach is developed for the analysis of carrier transport through superconducting heterostructures and micro-constrictions within the Bogoliubov-de Gennes (BdG) framework. The method is applied to study the role of Andreev reflection and Josephson-like phenomena in the current-voltage characteristics of inhomogeneous superconducting structures. I-V characteristics are experimentally demonstrated in YBCO micro-constrictions with potential applications in millimeter-wave and THz devices.