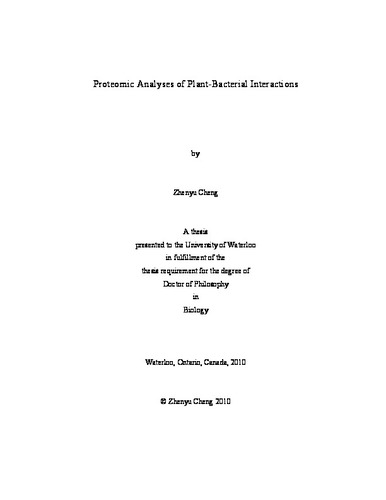 Proteome-level changes of both the plant growth-promoting bacterium (PGPB) Pseudomonas putida UW4 and its plant host Brassica napus (canola) were profiled using two-dimensional (2-D) difference in-gel electrophoresis (DIGE) and mass spectrometry, to elucidate the proteins’ prospective of plant-bacterial interactions. This study was undertaken in an effort to elaborate how a plant growth-promoting bacterium and its plant host biochemically and physiologically influence one another. More specifically, the effects of the PGPB P. putida UW4 on the proteome of canola and vice versa were examined. In addition, environmental stresses including heavy metal and salt were incorporated into the system. Moreover, how the presence of a functional bacterial 1-aminocyclopropane-1-carboxylate (ACC) deaminase (AcdS), which can lower plant ethylene levels and hence promote plant growth under a variety of stresses, would affect protein expression in both the bacterium and the plant was investigated. First, 2-D DIGE was used to detect significantly up- or down- regulated proteins in P. putida UW4 and its AcdS minus mutant in response to the presence of 2 mM nickel. Thirty-five proteins whose expression was altered were successfully identified by mass spectrometry and sequence comparisons with related species. Nineteen of the identified proteins were detected as differentially expressed in both wild-type and AcdS minus mutant expression profiles. Functional assessment of proteins with significantly altered expression levels revealed several mechanisms involved in bacterial heavy metal detoxification, including general stress adaptation, anti-oxidative stress and heavy metal efflux proteins. In addition, by detection of bacterial protein expression changes in the presence of plant exudates, three unique P. putida UW4 proteins that mediate interactions between the bacterium and its plant host were identified. However many of the observed changes of protein expression elicited by nickel and plant exudates were similar for wild-type P. putida UW4 and the AcdS minus mutant, with the majority of identified significant protein expression changes occurring in both strains. This is not unexpected because the P. putida UW4 ACC deaminase is unlikely to be involved in bacterial perception and response to plant host signals and environmental stimuli, and it causes a noticeable difference only in plant growth. A comprehensive proteome 2-D reference map of the PGPB P. putida UW4 containing 326 2-D gel spots representing 275 different proteins was also constructed. A 2-D database containing all the mass spectrometric information of P. putida UW4 proteins has been constructed. The data set has been deposited into the World-2DPAGE database and is accessible at http://world-2dpage.expasy.org/repository/. On the plant side, ninety proteins with significantly altered expression levels in the presence of salt and/or bacteria were identified by mass spectrometry. Many of these proteins are involved in photosynthesis, anti-oxidative processes, salt transportation/accumulation and pathogenesis-related responses. Importantly, the presence of the bacterial ACC deaminase was observed to alter the plant’s protein expression in response to salt stress. The effects included enhanced photosynthesis and salt accumulation contributed by wild-type P. putida UW4. The work described in this thesis furthers our understanding of plant-bacterial interactions, and is also likely to be of importance to both organic agriculture and environmental remediation efforts.