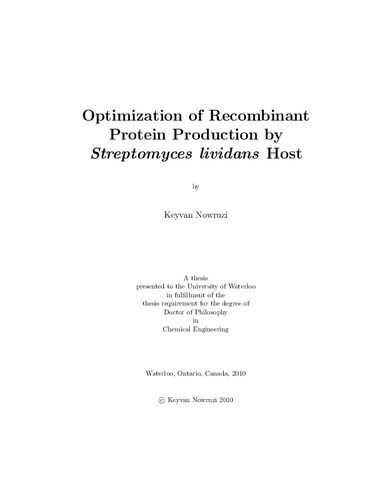 Interleukin-3 is a cytokine, which acts on many target cells within the haemopoietic system, often in synergy with the other cytokines. Streptomyces lividans NCIMB 11416/IL3 p002 secreting human interleukin-3 was used as the host organism in this study of improving target protein production. Streptomyces also produces several proteases including extracellular endoprotease that truncate the N-terminus of the recombinant protein. Federal guidelines and regulations banning animal-derived medium components necessitate the refinement or redevelopment of industrial medium formulations. The development of a defined medium without animal products is most desirable for the production of pure and safe biological products. The objective of the proposed research was the development and application of engineering methodology for the development of a defined medium and the analysis and optimization of a bacterial bioprocess for recombinant protein production. The underlying hypothesis is that a significant improvement of target protein productivity is achievable by using appropriate optimization techniques. During the first phase of this study the task was to develop a systematic procedure for the design and optimization of a chemically defined medium. The study aimed at replacing casein peptone in conventional medium for S. lividans with essential amino acids and determining the optimum proportion of the amino acids. To accomplish this, starvation trials with growth limiting amino acids were performed to establish the baseline for the nutritional requirement. The starvation trials revealed that essential amino acids for growth and product formation are amongst the following eight amino acids: Arg, Asn, Asp, Glu, Leu, Met, Phe, and Thr. Following these preliminary experiments, a statistically based experimental method called mixture experiments along with distance-based multivariate analysis revealed that Asp, Leu, Met, and Phe were the essential amino acids. Then, another mixture experiment design known as simplex lattice design was performed and artificial neural networks were employed to obtain the optimum proportions of the essential amino acids. The optimal medium was found to be composed of 56% Asp, 5% Met, and 39% Phe. It was found in previous studies that in complex media, several types of protease are produced during fermentation. Using the defined medium no proteolytic activity was detected in the fermentation broth. The second optimization method was based on metabolic flux analysis. A comprehensive metabolic network was developed for S. lividans. The metabolic network included carbohyderate and amino acid metabolism in both anabolic and catabolic reactions. According to the experimental results, the time course of the fermentation was divided into two phases, Phase E1 and Phase E2. In the first phase amino acids were used as a nitrogen source and in the second phase ammonia was the nitrogen source for growth and product formation. The metabolic network was used to form a set of linear algebraic equations based on the stoichiometry of the reactions by assuming pseudo-steady state for intracellular metabolites. The metabolic flux model consisted of 62 intracellular metabolites and 91 biochemical reactions. Two different objective functions were considered for optimization: maximizing the specific growth rate and minimizing the redox equivalent. A linear programming approach was used for optimizing the objective functions. The proposed model was able to predict the specific growth rate very accurately with a maximum error of 10%. The oxygen uptake rate and carbon dioxide evolution rate were evaluated with maximum error of 27% and 35%, respectively. Sensitivity analysis revealed that amino acid uptake was the growth limiting flux during the Phase E1 of the fermentation. During Phase E2 the uptake rate of ammonia had a significant effect on the specific growth rate. Sensitivity analysis of the specific growth rate and redox potential with respect to the biomass components showed that any additional supply of biomass building blocks (amino acids, nucleotides) would not significantly affect the specific growth rate and redox potential production as well as the calculated flux pattern.