Thermoelectric Properties of Ternary Tellurides and Quaternary Derivative of Tl9BiTe6 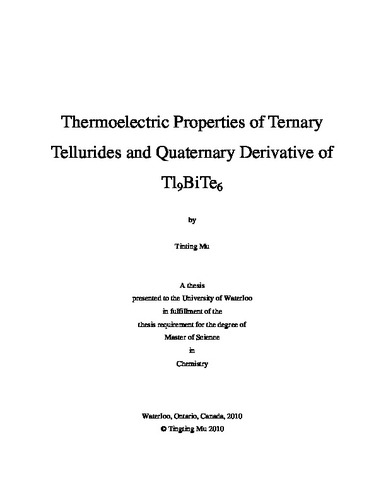 Abstract The main focus of this work was on exploratory preparation of thermoelectric materials and analyses of their physical properties. A thermoelectric material is capable of converting heat to electricity or vice versa. Usually, narrow band gap semiconductors are good candidates for thermoelectric applications, because such materials have large Seebeck coefficient, reasonably high electrical conductivity and low thermal conductivity. In this work, two different systems were studied, ternary layered tellurides and quaternary derivatives of Tl9BiTe6. I tried to prepare Pb1−xBi2+xTe4 with x = 0.30, 0.10, −0.10 and = 0.30 and Pb1−xBi4+xTe7 with x = 0.15, 0.00, −0.15 and −0.35, and two pure compounds, Pb0.8Bi2.2Te4 and Pb0.9Bi2.1Te4 were obtained. Powder X-ray diffraction was used to confirm the purity of the compounds, and physical properties were measured on cold-pressed samples with densities around 80% of the theoretical value. The figure of merit of the ternary tellurides is comparable to the published values of PbBi2Te4 (0.5 at 600 K). I also investigated the quaternary series Tl8.67PbxBi1.33−xTe6 with x between 0.50 and 1.00. The purity was confirmed by powder X-ray diffraction data, and physical properties were measured on Spark Plasma Sintered (SPS) samples. Low thermal conductivity was observed as well as competitive power factors. The highest ZT value was 0.57 for the compound Tl8.67Pb0.60Bi0.73Te6 at 575 K.