Characterization of the Downstream Effects of the Rainbow Trout (Oncorhynchus mykiss) Chemokine, CK-2 on Macrophages 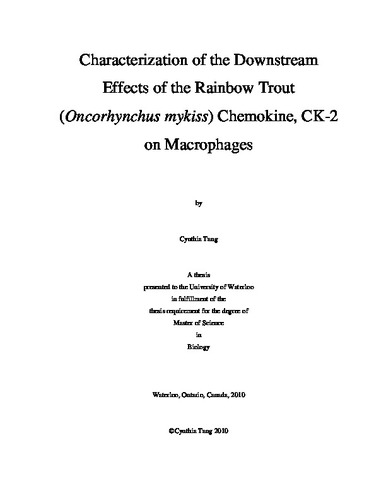 Chemokines are chemotactic cytokines that have the ability to attract leukocytes and guide them via a concentration gradient to sites of injury/infection. These small, basic proteins are secreted when induced and act on their target cells through G-protein coupled receptors. The downstream effects of this family of immune molecules are vast and have not fully been characterized. These versatile molecules seem to be able to serve as a link between the innate and adaptive immune systems as they are capable of inducing the inflammatory response of the innate immune system as well as triggering the initiation of the adaptive immune system. There are currently 46 known chemokines in humans. Chemokines have also been isolated from mouse, chicken, frog and fish. The rainbow trout chemokine CK-2 is the only known functional CC chemokine in possession of a mucin stalk. A previous study in this lab showed that stimulation by PHA causes a decrease in CK-2 transcript levels in rainbow trout head kidney and peripheral blood leukocytes (PBLs) as well as in the rainbow trout macrophage-like cell line RTS-11. CK-2 protein was found expressed in RTS-11 but not in the spleen tissues of stimulated fish. A chemotaxis assay was performed to determine the activity of recombinant CK-2. It was observed that recombinant CK-2 induces the migration of rainbow trout PBLs as well as RTS-11 cells at an optimal concentration of 100ng/mL when purified under native conditions. The migration of cells treated with pertussis toxin is significantly reduced, indicating that it relies on G-protein coupled receptors. Treatment of RTS-11 cells with recombinant CK-2 results in changes in the expression profiles of various immune response genes including those that are involved in the inflammatory response and the responses against both intracellular and extracellular pathogens. Interestingly, rCK-2 induced an upregulation in the expression of the surface molecule CD4 at the level of transcription. The increase in CD4 may suggest a possible role for CD4 in the regulation of the cell’s response to chemokines, indicating a potential function for the molecule in macrophages which has yet to be determined. This study shows that CK-2 is a functional chemokine that has a role in the rainbow trout immune response involving, but not limited to, macrophages.