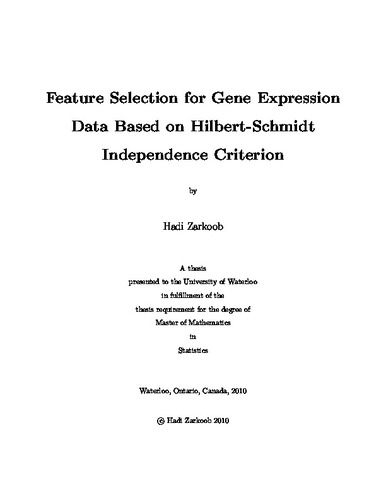 DNA microarrays are capable of measuring expression levels of thousands of genes, even the whole genome, in a single experiment. Based on this, they have been widely used to extend the studies of cancerous tissues to a genomic level. One of the main goals in DNA microarray experiments is to identify a set of relevant genes such that the desired outputs of the experiment mostly depend on this set, to the exclusion of the rest of the genes. This is motivated by the fact that the biological process in cell typically involves only a subset of genes, and not the whole genome. The task of selecting a subset of relevant genes is called feature (gene) selection. Herein, we propose a feature selection algorithm for gene expression data. It is based on the Hilbert-Schmidt independence criterion, and partly motivated by Rank-One Downdate (R1D) and the Singular Value Decomposition (SVD). The algorithm is computationally very fast and scalable to large data sets, and can be applied to response variables of arbitrary type (categorical and continuous). Experimental results of the proposed technique are presented on some synthetic and well-known microarray data sets. Later, we discuss the capability of HSIC in providing a general framework which encapsulates many widely used techniques for dimensionality reduction, clustering and metric learning. We will use this framework to explain two metric learning algorithms, namely the Fisher discriminant analysis (FDA) and closed form metric learning (CFML). As a result of this framework, we are able to propose a new metric learning method. The proposed technique uses the concepts from normalized cut spectral clustering and is associated with an underlying convex optimization problem.