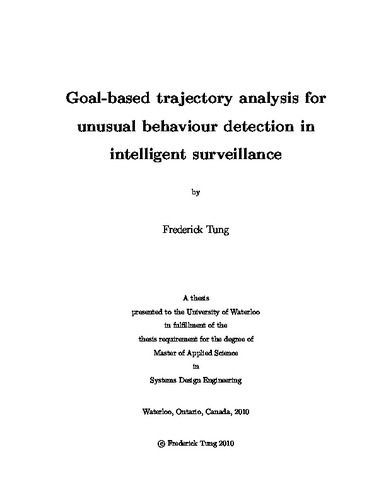 Video surveillance systems are playing an increasing role in preventing and investigating crime, protecting public safety, and safeguarding national security. In a typical surveillance installation, a human operator has to constantly monitor a large array of video feeds for suspicious behaviour. As the number of cameras increases, information overload makes manual surveillance increasingly difficult, adding to other confounding factors like human fatigue and boredom. The objective of an intelligent vision-based surveillance system is to automate the monitoring and event detection components of surveillance, alerting the operator only when unusual behaviour or other events of interest are detected. While most traditional methods for trajectory-based unusual behaviour detection rely on low-level trajectory features, this thesis improves a recently introduced approach that makes use of higher-level features of intentionality. Individuals in a scene are modelled as intentional agents instead of simply objects. Unusual behaviour detection then becomes a task of determining whether an agent's trajectory is explicable in terms of learned spatial goals. The proposed method extends the original goal-based approach in three ways: first, the spatial scene structure is learned in a training phase; second, a region transition model is learned to describe normal movement patterns between spatial regions; and third, classification of trajectories in progress is performed in a probabilistic framework using particle filtering. Experimental validation on three published third-party datasets demonstrates the validity of the proposed approach.