The origin, transformation and deposition of sediments in Lake Bosomtwe/Bosumtwi (Ghana, West Africa) 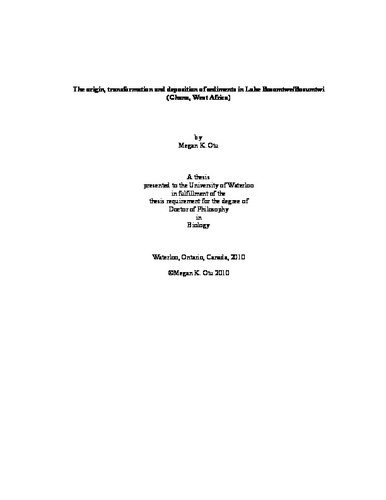 Recent drought over West Africa (1970s-present) has been a global concern, and the ability to predict the frequency and severity of future droughts is important to mitigate the devastating socio-economic effects of drought. The Sahel region, situated at 10-20°N just south of the arid Sahara Desert and north of the forested Guinea Coast, is particularly vulnerable to drought periodicity because rainfall is already low at 400 mm yr-1. The ability to predict future climate variability depends on adequate knowledge of fluctuations in the past. In West Africa, meteorological records are too sparse and too short in duration to characterize the drought frequency. Consequently, climate reconstructions from lacustrine sediment records are increasingly recognized as an important source of information on past climate variability. Lake Bosomtwe, Ghana (6o30N and 1o25W) was formed over one million years ago by a meteorite impact crater in the Guinea Coast region, just south of the Sahel region. Lake Bosomtwe has a closed-drainage hydrology and lake levels are known to fluctuate with the net flux in rainfall inputs relative to evaporative outputs. In 2004, the International Continental Scientific Drilling Program recovered the complete sediment record for paleoclimatic reconstructions. However, very little has been studied of the limnological conditions that lead to the formation of laminated sediments in Lake Bosomtwe. This thesis has set out to understand the influence climate has on the physical, chemical and biological in-lake processes that generate sedimenting materials, which are preserved as laminated sediment layers. Two years of water column sampling of temperature, oxygen and nutrients at a central deep-water site (78 m water depth maximum) found that this quiescent crater lake is thermally stratified during much of the year, with anoxia persisting below 35 m water depth. During the short dry season of July and August, the monsoon rains that are associated with the intertropical convergence zone (ITCZ) are displaced northwards over the Sahel region (and away from lake Bosomtwe), and cool air temperatures and clear night skies lead to the disruption of the thermocline and circulation of dissolved nutrients nitrogen (N) and phosphorus (P) in Lake Bosomtwe. Phytoplankton primary productivity, as measured by particulate carbon and chlorophyll a concentrations, was found to increase markedly following the nutrient upwelling event in August. Sediment trap samplers deployed at 20 and 30 m water depth captured the pattern of organic matter deposition and a high flux of organic sediment was deposited shortly after the nutrient upwelling episode in August. The composition of these organic-rich sediments was distinguished by a marked depletion in δ13C and enrichment of δ15N, as compared to sediments deposited before and after this event. Spatial assessment of sediment cores identified that presently, visible laminations were preserved at and below 35 m water depth, but, not at shallower depths. Water depth was also positively correlated with the organic matter content in sediment records and could be used to reconstruct pre-historic lake levels down core. The relationship between lake level and organic content in sediments predicted that water levels were likely 22 m lower than present levels during the period ~1425-1610 CE, which corresponds with a climatic periods known as the Little Ice Age (LIA). The spatial sediment trends also revealed that inorganic sedimentation rates had increased since the onset of recent land clearance and road construction in the catchment, particularly to the north, near the town of Abono. For this reason, two cores from the central deep-water region of Lake Bosomtwe were analysed for organic and carbonate content, δ13C and δ15N, nutrients (C, N, P), magnetic susceptibility, greyscale imagery of the x-radiograph and micro-X-ray analysis of elemental constituents. Paleoenvironmental reconstructions during the past 550 years found that climate-driven lake level change was a prominent factor contributing to the organic content of sediments. High inorganic content, iron concentrations and depleted δ13C distinguished a low stand during the LIA (~1425-1610) when pelagic sediments were likely exposed to periodic oxygenation. High concentrations of organic matter, calcium (Ca) and strontium (Sr), enrichment of δ13C and low C:N ratios were indicative of wet years that likely increased lake levels and the depth of water column mixing. However, sediments with high organic content, depleted δ13C signatures and reduced Ca and Sr concentrations were suggestive of drought years that restricted the depth of seasonal water column mixing and nutrient circulation and did not necessarily result in pronounced lake-level change. During the past century, δ13C of bulk matter was positively correlated with the rainfall anomalies (r2 = 0.45, P < 0.002), indicating that droughts can result in reduced primary productivity, which may ultimately lower fishery yields. The communities living within the crater are dependent on subsistence fishing and farming, and predicting the drought frequency and magnitude in this region is essential to protecting both the ecosystem and the human population. Long-range climate forecasts for West Africa predict greater drought and increasing air temperature. However, with a detailed long-term paleoclimatic reconstruction from Lake Bosomtwe sediment records, potentially the accuracy of these predictions can be improved and better equip policy makers to enact a viable action plan in the best interests of the people.