Women in Management: A Canadian Perspective 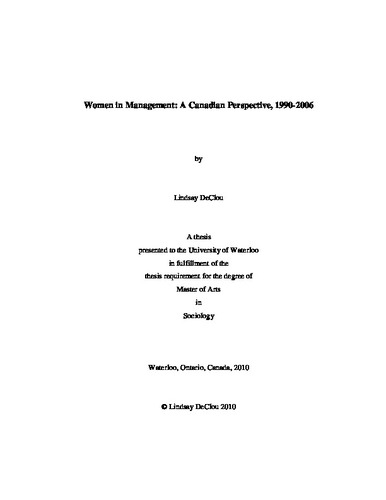 The gender distribution in the Canadian labour force has changed significantly over the course of the past few decades. Women have gained employment in areas of industry and occupational sectors where they were previously significantly underrepresented. A key sector of interest is management occupations as they are often associated with high levels of power, prestige, and income. Historically this sector has employed a much larger proportion of men than women and is especially true for senior management occupations. This thesis takes a detailed look at how women have changed their representation over time in management occupations in the Canadian labour market as well as identifying key variables that can help to predict women’s employment as a manager. This is achieved by using both Canadian Census and General Social Survey data that spans a total of 16 years. Analyzing data that covers multiple periods in time rather than a single year allows for a better assessment of the changes that have taken place for women in management occupations as well as the Canadian labour force as a whole. This thesis assesses where women have made the largest and conversely the smallest increases regarding their representation in the management sector including management major groups and unit groups. The industry division that these management major groups are located within is also taken into account as they have a significant influence on the number of female managers employed, including the ratio of men to women. In addition to assessing the changes in the gender distribution of Canadian management occupations, this thesis identifies key variables within the General Social Survey that impact Canadians earnings as well as those which may help to predict employment as a manager. Identifying these key variables aids in understanding how women may be able to improve their likelihood of being employed as a manager as well as increasing their income. Investments in one’s human capital is said to improve their annual personal income, thus, these variables are of central importance to this research. While human capital theory became popular decades ago, due in large part to the work of Gary Becker (1975), it is true that there is still much validity to his theory. The four research questions and fifteen hypotheses that guide this thesis are addressed in two data analysis chapters. The first uses Canadian Census data and begins with a broad view of the Canadian labour market by assessing the occupational sector distribution, including the distribution of both men and women in these sectors. As the chapter progresses the scope narrows, moving from occupational sectors, to management major groups, and then to management unit groups. The number of men and women in each of these management groups is assessed. In addition, the ratio of men to women is presented for management major groups. Senior management occupations is the management major group where women have the worst representation and as a result the gender distribution for industry divisions is separately assessed for senior and non-senior management occupations. The analysis of this data shows that women have significantly improved their representation in management occupations over time but that they are still most underrepresented in senior management occupations. The impact of industry divisions on the ratio of men to women is significant; it is only when the data is broken down to this level that women seem to outnumber men in a number of different management major groups, including senior managers for particular industry divisions. The second data analysis chapter draws on Canadian General Social Survey data to assess the impact that human capital, background, family, and other independent and interaction variables have on a person’s annual income. The same types of variables, with the exception of interaction variables, are also used to predict management status. Through the inclusion of four different survey years the impact that these variables have on income, their ability to predict management status, and how this has changed over time is assessed. This research shows that human capital variables are the most significant predictors of management status at each survey year and are associated with the largest returns on annual personal income.