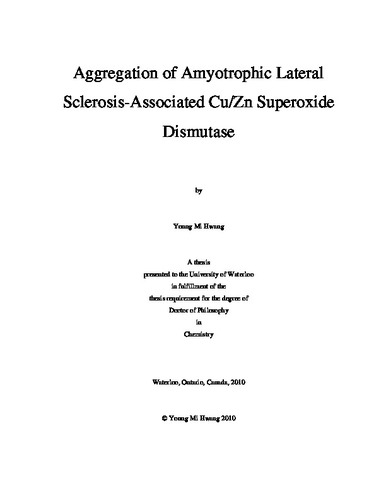 Amyotrophic lateral sclerosis (ALS) is a devastating, progressive, and fatal neurodegenerative disease. Despite the fact that ALS is the most common motor neuron disease in adulthood, there is no effective treatment for the disease. Although most ALS cases (90-95%) are sporadic (sALS), the remaining cases (5-10%) are dominantly inherited and referred to as familial ALS (fALS). Because sALS and fALS show indistinguishable disease symptoms, a common disease mechanism has been proposed. After the discovery of the link between fALS and mutants of cytosolic Cu/Zn superoxide dismutase (SOD1), over 140 mutations in SOD1 have been identified to account for ~20% of fALS. The location of these mutants are scattered throughout the primary and tertiary structures of the protein. It is widely accepted that fALS-linked mutations in SOD1 result in a gain of toxic function to cause the disease, rather than a loss of physiological function, although the nature of the toxic mechanism remains unclear. SOD1 is a -rich, homodimeric metalloenzyme that catalyzes the dismutation of superoxide radicals to O2 and H2O2. The protein is ubiquitously expressed and the mature form of SOD1 (holo SOD1) contains one catalytic Cu ion, one structural Zn ion, one intra-molecular disulfide bond (between C57 and C146) and two free Cys residues (C6 and C111) per 153 residue subunit. Analogous to many different human diseases in which protein aggregation is a hallmark, aggregation of Cu/Zn superoxide dismutase (SOD1) is implicated in the pathogenesis of ALS. This thesis reports the first observation of aggregation of the most abundant form of SOD1 in vivo, the native, metallated (holo) dimer, under physiologically relevant conditions (37 °C and pH 7.8). The medical relevance of aggregates is demonstrated by structural and tinctorial analyses as well as the novel observation of binding of an anti-SOD1 antibody that specifically recognizes pathological aggregates in ALS. Additionally, ALS-associated SOD1 mutations promote aggregation but are not required, supporting a common mechanism in familial and sporadic ALS. The aggregation is characterized by a lag phase, which is diminished by self- and cross-seeding where heterogeneous nucleation is the underlying mechanism. Moreover, multiple pathways of aggregation are elucidated including dimer dissociation and metal loss. It is shown that if holo SOD1 loses more Zn ions than Cu ions, the aggregation profiles have shorter duration and lower final intensity, whereas when holo SOD1 loses more Cu ions than Zn ions, the aggregation profiles have longer duration and higher intensity. Taken together, the data in this thesis establish a valuable system for understanding SOD1 aggregation and toxicity mechanisms which can be used for developing therapeutic strategies targeting protein aggregation.