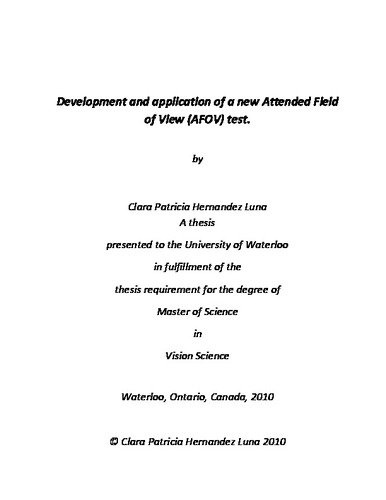 Purpose: An important challenge for eye care practitioners is meeting the needs of an ever-increasing elderly population. Standard vision tests are inadequate for determining performance in real life situations. One test that was developed to address this issue is the Attended Field of View (AFOV) test (Coeckelbergh et al, 2004). This test was designed to assess the functional field of view when people are allowed to make habitual head and eye movements. The original AFOV test is no longer available. This research seeks to develop a replacement AFOV test and to demonstrate its reliability as an assessment tool. Methods: Two groups of participants were recruited. The first group consisted of seven participants between the ages of 15-41 years. The second group consisted of seven participants between the ages of 59–79 years. All subjects had visual acuities equal or better than 20/25 and no history of visual field loss. A computer-generated display was observed from a 60cm distance. The display consisted of 24 white circles on a gray background and one open circle (target). The circles were organized with one circle in the centre and eight located radially at three eccentricities (4, 8, and 12 degrees). Participants were required to locate the target circle and identify the gap direction. A response was considered correct when both the location and gap direction were accurate. Using a weighted staircase method based on presentation time each location was evaluated independently. Viewing efficiency [log (1/threshold presentation time)] was obtained for each location. The data was analyzed using repeated measures ANOVA. Results: A comparison of viewing efficiency for the two age groups demonstrates that viewing efficiency is consistently lower for the older group at all three visits. The main effect of age was observed (F1,12=25.842;p=0.000). In the older group, a significant difference was found between the second and third visits. This difference was not found in the younger group. A main effect of eccentricity was found in both groups (F2,36=30.84;p<0.000), but no interaction was observed between eccentricity and group (F2,36=0.42;p=0.662). Viewing efficiency values in the older group were lower in all directions (main effect of age) (F1,96=150.36;p<0.000). Directional variations in viewing efficiency were observed showing higher values in the horizontal axes (directions Right and Left) than along the vertical axes (directions Up and Down) in both groups. A comparison of superior and inferior hemifield data shows consistent differences for both age groups. The superior hemifield (average of directions located superiorly to the horizontal axis) demonstrate higher viewing efficiency values (better performance) than the inferior hemifield. Conclusions: The use of the new AFOV test requires a practice time before its use in order to avoid the confound of a learning effect, but subsequent data is reliable in young people. The learning effect was more significant in older people and for this reason the use of the test should be preceded by a longer practice session in this population. When interpreting the results of this test one must account for eccentricity, direction, and age.