The Application of FROID in MR Image Reconstruction 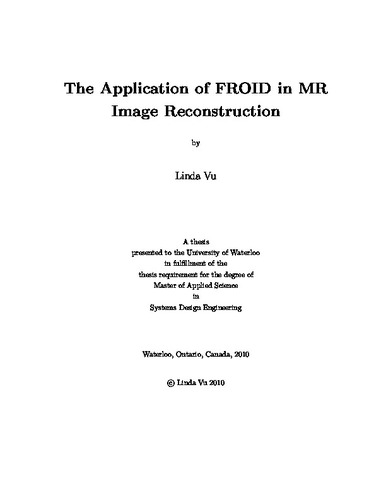 In magnetic resonance imaging (MRI), sampling methods that lead to incomplete data coverage of k-space are used to accelerate imaging and reduce overall scan time. Non-Cartesian sampling trajectories such as radial, spiral, and random trajectories are employed to facilitate advanced imaging techniques, such as compressed sensing, or to provide more efficient coverage of k-space for a shorter scan period. When k-space is undersampled or unevenly sampled, traditional methods of transforming Fourier data to obtain the desired image, such as the FFT, may no longer be applicable. The Fourier reconstruction of optical interferometer data (FROID) algorithm is a novel reconstruction method developed by A. R. Hajian that has been successful in the field of optical interferometry in reconstructing images from sparsely and unevenly sampled data. It is applicable to cases where the collected data is a Fourier representation of the desired image or spectrum. The framework presented allows for a priori information, such as the positions of the sampled points, to be incorporated into the reconstruction of images. Initially, FROID assumes a guess of the real-valued spectrum or image in the form of an interpolated function and calculates the corresponding integral Fourier transform. Amplitudes are then sampled in the Fourier space at locations corresponding to the acquired measurements to form a model dataset. The guess spectrum or image is then adjusted such that the model dataset in the Fourier space is least squares fitted to measured values. In this thesis, FROID has been adapted and implemented for use in MRI where k-space is the Fourier transform of the desired image. By forming a continuous mapping of the image and modelling data in the Fourier space, a comparison and optimization with respect to data acquired in k-space that is either undersampled or irregularly sampled can be performed as long as the sampling positions are known. To apply FROID to the reconstruction of magnetic resonance images, an appropriate objective function that expresses the desired least squares fit criteria was defined and the model for interpolating Fourier data was extended to include complex values of an image. When an image with two Gaussian functions was tested, FROID was able to reconstruct images from data randomly sampled in k-space and was not restricted to data sampled evenly on a Cartesian grid. An MR image of a bone with complex values was also reconstructed using FROID and the magnitude image was compared to that reconstructed by the FFT. It was found that FROID outperformed the FFT in certain cases even when data were rectilinearly sampled.