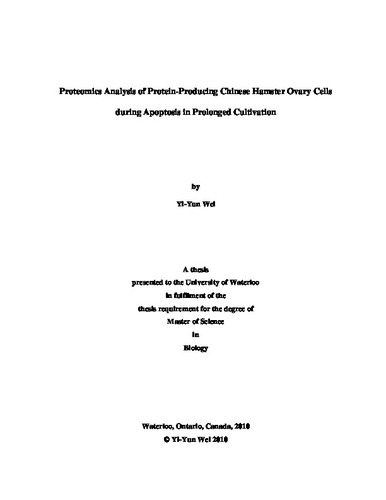 Among the factors important for maintaining productivity of recombinant proteins in mammalian cells, culture lifetime, cell density and cell viability are three simple but essential aspects that can greatly influence the final yield. During cell culturing, the degradation of environmental conditions such as nutrient depletion and accumulation of toxic waste products, often lead to premature apoptotic cell death in cultures and suboptimal protein yield. Although apoptosis has been extensively researched, the changes in the whole cell proteome during prolonged cultivation, where apoptosis is a major mode of cell death, have not been examined. The work presented in this thesis is the first whole cell proteome analysis of non-induced apoptosis in mammalian cells. Flow cytometry analyses of the level of activated executioner caspases, caspase 3 and 7, demonstrated the onset of apoptosis in CHO batch cultures after the exponential phase. The monitoring of apoptotic cell death assesses the culture conditions at different time points and allows the association of changes in the protein abundances to the degradation of culture conditions, in particular the degree of apoptosis in the whole cultures. The detection of activated caspase 8 and caspase 9, which trigger the extrinsic and intrinsic pathway respectively, has shown that the onset of apoptosis in CHO cells during prolonged cultivation predominantly is via the intrinsic pathway. To examine the proteomic changes in a monoclonal antibody-producing CHO cell culture at various phases of a batch culturing process, a differential in gel electrophoresis proteomic approach was employed in this study. CHO protein samples at four time points during cultivation were compared. A total of 40 differentially expressed protein spots were successfully identified by mass spectrometry sequencing, resulting in 28 unique protein identifications. These proteins include four structural proteins of the cytoskeleton, ten endoplasmic reticulum and cytosolic chaperones and folding proteins, seven metabolic enzymes and seven other proteins of varied function. The cleavage of cytoskeletal proteins is a known consequence of apoptosis and the activation of executioner caspases. On the other hand, the induction of seven ER chaperone and foldases is a solid indication for the onset of unfolded protein response, which is triggered by cellular and ER stresses, many of which are present during prolonged batch cultures. In addition, the upregulation of six glycolytic enzymes and another metabolic protein emphasizes a change in the energy metabolism likely occurred when culture conditions degraded and apoptosis advanced. Interestingly, although a significant portion of proteins identified are well known housekeeping proteins, recent studies have shown that many of them exhibit a wide variety of other roles, including apoptosis regulation and execution. Overall, this study shows that the most drastic changes in aging CHO cultures, where apoptosis is known to be part of, involve the onset of UPR and upregulation of proteins catalyzing glucose metabolism.