A Poroelastic Model of Transcapillary Flow 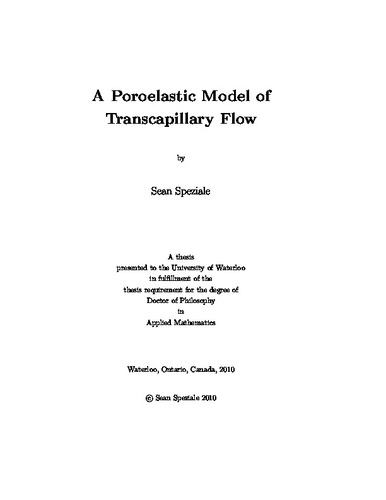 Transcapillary exchange is the movement of fluid and molecules through the porous capillary wall, and is important in maintaining homeostasis of bodily tissues. The classical view of this process is that of Starling's hypothesis, in which the forces driving filtration or absorption are the hydrostatic and osmotic pressure differences across the capillary wall. However, experimental evidence has emerged suggesting the importance of the capillary wall ultrastructure, and thus rather than the global differences between capillary and tissue, it is the local difference across a structure lining the capillary wall known as the endothelial glycocalyx that determines filtration. Hu and Weinbaum presented a detailed cellular level microstructural model of this phenomenon which was able to explain some experimental discrepancies. In this Thesis, rather than describing the microstructural details, the capillary wall is treated as a poroelastic material. The assumptions of poroelasticity theory are such that the detailed pore structure is smeared out and replaced by an idealized homogeneous system in which the fluid and solid phases coexist at each point. The advantage of this approach is that the mathematical problem is greatly simplified such that analytical solutions of the governing equations may be obtained. This approach also allows calculation of the stress and strain distribution in the tissue. We depart from classical poroelasticity, however, due to the fact that since there are concentration gradients within the capillary wall, the filtration is driven by both hydrostatic and osmotic pressure gradients. The model predictions for the filtration flux as a function of capillary pressure compares favourably with both experimental observations and the predictions of the microstructural models. An important factor implicated in transcapillary exchange is the endothelial glycocalyx, which was shown experimentally to protect against edema formation. Using our theory in combination with the experimental measurements of glycocalyx thickness and pericapillary space dimension (PSD), we make a quantitative comparison for the excess flow as a result of a deteriorated glycocalyx, which shows reasonably good agreement with the data. Since many of the parameters in the model are difficult to measure, a sensitivity analysis was performed on the most important of these. Finally, since there was variation in the measurements of glycocalyx thickness and PSD, we used probability distributions to represent the data, and performed further calculations to obtain ranges of likely values for the various parameters. This work could find applications in cardiovascular disease, where the glycocalyx is degraded or absent, and in cancer research, where the abnormal vasculature is an impediment to the efficient delivery of anti-cancer drugs.